This classic of the genre (which I’ve sadly not yet read) was first published 30 years ago, and remains one of the author’s – and the genre’s – most popular books. To celebrate 30 years of Feist, the series is getting a facelift, and it’s a very fine one, too. Here’s the new cover for Magician (to be published in September): 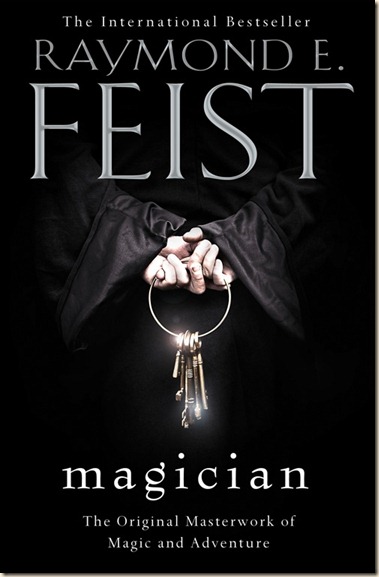 The world had changed even before I discovered the foreign ship wrecked on the shore below Crydee Castle, but it was the harbinger of the chaos and death that was coming to our door.

War had come to the Kingdom of the Isles, and in the years that followed it would scatter my friends across the world. I longed o train as a warrior and fight alongside our duke like my foster-brother, but when the time came, I was not offered that choice. My fate would be shaped by other forces.

My name is Pug. I was once an orphaned kitchen boy, with no family and no prospects, but I am destined to become a master magician…

I’ve been reading a lot about this novel, the series and the author’s work as a whole recently, and I’m definitely thinking I should read this very soon.

The eBook will be released in the UK, for the first time, on September 13th 2012.

Posted by Civilian Reader at 3:21 AM