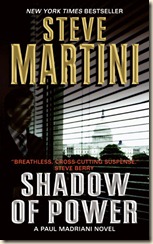 An Intelligent Thriller, let down by unfortunate Pacing Issues

A writer is savagely slain while on a publicity tour – a literary provocateur who craved headlines, but whose last book may have gone too far. His revelations about secret language buried in the U.S. Constitution – and hints about an explosive missing letter of Thomas Jefferson’s – may be enough to cause an irreparable tear in the fabric of the nation… and perhaps drove a volatile youth to homicide.

But Paul Madriani thinks a troubled young man with dark connections has been chosen as a scapegoat to cover up something far deadlier that festers in America’s political heart. And in the wake of the strange disappearance of a Supreme Court Judge, Madriani must survive long enough to find the devastating answers hidden in the shadow of power.

I must first admit to taking a long time to figure out what all the fuss is about, here. The ‘firebrand’ author has written a book about the fact that the language of slavery (the 3/5ths rule, the Fugitive Slave Clause, and so forth) is still in the US Constitution, even though Amendments have made it ‘dead letter law’. Because of this book, riots and new calls for revolution are reverberating around the media and agitated and concerned citizens. Ok, fine. But why is it such a big deal? As lead protagonist Madriani says, “Since none of this is new – that language has been there for what, going on two and a half centuries? – why now?” Thankfully, Martini does do a good job of explaining it, even though I do consider it a weaker premise than could have been formulated.

One thing that I noticed very early on is that Martini is a very gifted writer: his prose, while not as fast-paced as Grisham’s or Sandford’s, are crafted to draw you along with the story; offering just enough to keep you reading; revealing just enough to keep you guessing. The historical detail is superb, and because of my own existing interest in all things American, added another element and further layers to the novel that engaged me. Equally, Martini offers lots of commentary and explanation of legal practices, tactics and specifics, which certainly helped expand my knowledge of US criminal law.

For this reason, the afterword is also excellent, shining a light on the history of the ‘Jefferson Letter’ and the Founding Fathers’ deliberations and struggles with the slavery issue. I must say, I always like it when authors provide such afterwords (James Rollins and David Baldacci's are always of particular interest).

That being said, there was one major weakness with the novel, and that’s the issue of pacing. Specifically, that it is uneven: at times, things move along briskly and I found myself sinking into the story, but at other times it dragged as the author gets bogged down in passages of detail, legalities, and history - all interesting, but at times the delivery was overly clunky. The scenes in the courtroom, too, sometimes drag on, as Madriani seems to play ‘gotcha’ with almost all the witnesses for the prosecution. The most interesting bits were in between court scenes, as Madriani and his partners search for Justice Ginnis and the ‘J Letter’, when the novel was more ‘political intrigue’ and less ‘legal thriller’.

If the pacing had been streamlined, then Shadow of Power would have been an excellent novel: believable characters, and interesting and intelligent plot, and excellent prose-writing.

This was my first novel by Martini, and I’d be willing to accept that I was perhaps hoping for something more akin to John Grisham and John Sandford, something more thrilling. I will, however, be reading at least one more novel by the author: I already own the eBook for the next in the series, Guardian of Lies, which appears to be another thriller with historical roots (that the CIA is involved in the conspiracy only makes it more enticing).