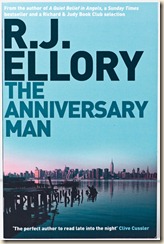 Twenty years ago, John Costello's life, as he knew it, ended. He and his beautiful girlfriend, Nadia, were victims of the deranged ‘Hammer of God’ killer who terrorised New Jersey City throughout the summer of 1984. Nadia was killed instantly. John survived, but withdrew from society, emerging only to work as a crime researcher for a major newspaper. Damaged he may be, but no one in New Jersey knows more about serial killers than John Costello.

Then a new spate of murders starts – all seemingly random and unrelated – until John discovers a complex pattern that links them. But could this dark knowledge be about to threaten his life?

This is the first novel by Ellory that I’ve ever read – for some reason, despite the considerable advertising and excellent reviews I’ve read for books such as A Quiet Belief in Angels and A Simple Act of Violence (which I have recently bought in eBook format), I just never got around to reading one of his books. So, I finally put everything else aside and picked up The Anniversary Man (which I had, actually, been waiting for in paperback). Given the considerable encomiums that Ellory’s writing receives, I came to the novel expecting to be slightly disappointed, but hopeful that it would live up to the hype. Thankfully, The Anniversary Man proved a very satisfying read.

One thing that struck me is how strange it was that the introduction to the novel was 43-pages long, only for the rest of the novel to be made up of short, punchy chapters. It slowed down the start of the novel, especially the hectic structure of the intro, jumping from Costello’s perspective to newspaper articles, to the moment of his attempted murder, and back again. I thought the frequent switching between the past and present in the intro might be frustrating, but it was not – you really get a sense of the character and how the events shaped him, effected him, in some ways broke his mind. It’s very good writing and, even though it’s not quickly paced, I found myself sinking into the narrative.

Everything starts to really fall into place around page 81, with the plot thickening, tension on the rise, and the serial killer angle really kicking in. Ellory’s done a phenomenal amount of research into serial killers and the dark sub-culture that has grown around them; and you’ll learn plenty of disturbing information about America’s worst citizens.

Even though Costello is mentioned prominently in the synopsis, the novel is actually written almost exclusively from the detective in charge of the investigation, Ray Irving’s perspective, as he struggles to solve the growing number of grisly murders, aided by information from Costello, who is not entirely above suspicion given his extensive knowledge of serial murderers and his intimate knowledge of the killings taking place.

The politics of policing, and how they limit Irving’s ability to do his job properly – the lack of support from the department until the story breaks, trumping the electoral necessities – paints a sorry picture of how understaffed the NYPD is, not to mention showing a rather worrying workload for the already stressed and over-worked detectives in New York.

The pacing of the novel felt uneven – it might be, however, that you just need to ensure you have time for the novel. For the first 150 pages or so I was actually pretty busy, so I was only able to read about 20 pages at a time, which stopped me from really sinking into the novel. But, after I managed to block out some proper time for it, I really got sucked into the story and finished it in two (long) sittings. Some passages felt quick and urgent, while others felt slow; with hindsight, this was probably intentional, highlighting the frantic pace Irving worked at in the immediate time after a murder, followed by the suffocating slowness of the waiting and lack of progress between them (the novel takes place from June until December, so you know it’s not going to be as fast-paced as a Patterson or even Sandford novel). The book has the strange characteristic of being both intimate (everyone is named, for example) and yet also slightly detached, which might further explain the peculiar pacing.

The end is sudden, and wasn’t entirely what I expected. This is no bad thing, as I’m disappointed with endings that are predictable or cop-out. With hindsight, the novel could only have ended this way, and Ellory does a good job of making the reader care enough about his characters that the reader should feel a sense of loss as the last few chapters unfold. Any other ending would have felt disappointing or half-cocked, I imagine.

Overall, this was a very satisfying read, and one that – allowed proper time – drew me in until the very end. Ellory’s prose are well crafted and fluid, his dialogue always realistic and completely devoid of cliché or clunky phraseology.

A very gifted writer, I can’t help wondering why it’s taken so long for my to hear about him. It wasn’t until the PR A Quiet Belief In Angels received for being a Richard & Judy Book Club choice that he seemed to get properly noticed.

The Anniversary Man is well worth your time.

[I’ll be reading and reviewing another of Ellory’s books - A Simple Act Of Violence – very soon, time willing.]