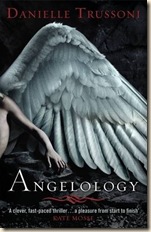 Are Angels the Next Big Thing in fiction?

“The Nephilim were on the earth in those days” (Genesis 6:4)

When Sister Evangeline finds mysterious correspondence between Mother Innocenta of the Saint Rose Convent and legendary philanthropist Abigail Rockefeller, it confirms Angels walked among us - and their descendants, the cruel Nephilim, still do.

Indeed, the Nephilim are hunting for artefacts concealed by Abigail Rockefeller during the Second World War - objects that will ultimately allow them to enslave mankind - and have so far been prevented from reaching their apocalyptic goal by one, clandestine organisation: The Angelology Society.

And if the Angelologists are to stand any chance of winning this new battle in the ages-old war, they must find the artefacts first. But their fate rests in the hands of innocent Sister Evangeline, who holds the key to unlocking Abigail Rockefeller's hiding places … and whose own destiny may yet find her prey to the terrifying Nephilim army, with horrifying consequences for humanity.

I really wanted to like this book, so my expectations were running high when it arrived for review. It has all the hallmarks of a bestseller: a Dan Brown-esque riddle, a secret society, a supernatural element, and an intriguing blend of fact and fiction. Sadly, the author’s lack of a developed literary skill makes this a rather dissatisfying read, as she succumbs to clumsy and over-long passages of exposition.

The plot is probably the book’s strongest element: simple, yet gripping and well-paced. However, the characters are – almost without exception – one-dimensional, and the author is unable to develop any sense of connection to them. For example, Verlaine (the ‘hero’ of the novel) wears vintage wing tips and has a favourite Hermes tie, because Trussoni wants us to think that he is an interesting person. He isn’t, and adding these small touches comes across like forced attempts to give him more depth, or make him more interesting; as if these extra touches might make him more believable. He is a private detective, hired by the (evil!) angel Percival Grigori, to investigate a convent and help Grigori’s family find a specific, important item.

Similarly, Evangeline just isn’t believable. How does a meek and obedient nun suddenly become a headstrong young woman determined to understand the mystery she has become entangled in? She doesn’t. It feels like her character alters simply because the author needs it to, and her growing romantic relationship with Verlaine seems contrived. Trussoni claims that Evangeline remained in the convent because of her love for her father. This isn’t how it feels; rather, it appears that she remained in the convent because it was essential to Trussoni’s plot that she did.

“Move over Stephanie Meyer. Angels are the new Vampires”, the press release declares in large, bold letters at the top. This is, sadly, premature and unwarranted. It would appear that Trussoni’s debut novel was bought on the strength of her memoir, Falling Through The Earth (indeed, much of the press release for this novel is about the author’s life and, oddly, also provides a biography for her husband...). Unfortunately for the author, her skills at writing fiction are just not up to the task of such intense publicity.

Despite finding myself frequently cringing at considerable tracts of exposition (such as the massive chunk of memoir narrated by a nun), I found myself continuing to read. Ultimately, Angelology has an excellent premise with great potential, unfortunately let down by the less-than convincing execution. The fact that every angel in the novel was ‘evil’, with no shades of grey, bothered me. Such a complex and interesting subject, not to mention one with endless possibilities, required more subtlety and nuance – both of which seemed utterly absent. It’s almost as if the novel was rushed from the planning stage to publication, before Trussoni was able to add the other layers needed to make this a novel worthy of the hype that surrounded its release.

This could have been so much better, but I feel it might be necessary to stick with the other big angel-related release of the year: Anne Rice’s Angel Time – at least Rice has an established voice in horror/supernatural fiction, and is known for her skills at plotting and realising her characters.

[Stefan will review Anne Rice’s Angel Time as soon as he gets a chance.]

Posted by Civilian Reader at 1:33 AM