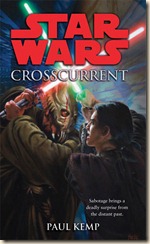 An ancient Sith ship hurtles into the future carrying a lethal cargo that could forever destroy Luke Skywalker’s hopes for peace.

The Civil War is almost over when Jedi Knight Jaden Korr experiences a Force vision so intense he feels compelled to act. Enlisting two salvage jocks from the outer reaches of the galaxy and their ship, Jaden sets out into space. Someone – or something – appears to be in distress.

But what Jaden and his crew find confounds them: A 5,000-year-old Sith dreadnaught – bringing with it a full force of Sith and one lone Jedi – has inadvertently catapulted eons from the past into the present. The ship’s weapons may not be cutting-edge, but its cargo, a special ore that makes those who use the Dark Side nearly invincible, is unsurpassed. The ancient Jedi on board is determined to destroy the Sith.

But for Jaden, even more is at stake: for his vision has led him to uncover a potentially indestructible threat to everything the Jedi Order stands for.

Thousands of years before the Legacy of the Force series, two Sith ships were sabotaged. One ship, Omen, crashed on a distant planet, and its survivors evolved into the ‘Lost Tribe of Sith’ introduced in the new Fate of the Jedi series and the e-novellas by John Jackson Miller. The other ship, Harbinger, was lost in a time-warp, finally exiting hyperspace far in the future, a very different galaxy from the one it left behind in what seems to be almost no time at all.

It is great that those in charge of guiding the evolution of the Star Wars series of novels have started to incorporate more and more layers to the overall story of the universe – drawing on seemingly innocuous details from other novels to build further on the Star Wars mythology. Indeed, Crosscurrent has far more connections to the wider Star Wars universe than most of the novels that have been set within it for quite some time.

The main antagonist in the novel, the Anzat Kell, is a truly creepy, evil creature whose menacing presence hovers over much of the story, as he ghosts in the wake of Jaden and his companions, believing the Jedi is the key to a greater understanding of the universe and the Force. Kell’s connection to Darth Krayt and Darth Wyrrlock is interesting, as these are two characters I’ve only seen in connection to the Star Wars: Legacy comic series (published by Dark Horse), set approximately 100 years after this novel. I wonder if they’ll appear again in the fiction, or if they will remain in the comics?

As mentioned above, Crosscurrent start’s with events that also open the Lost Tribe of the Sith e-novellas (parts 1, 2 and 3 available free here, here and here), from the perspective of the captain of Omen’s sister-ship, Harbinger. It’s great that there is more attention to the wider picture of events that unfold before the Fate of the Jedi sequence, but it might leave some new readers a little lost (but only for a short while). Saes is an interesting captain, whose ongoing battle with his former master, Relin, is central to the story, culminating in an explosive confrontation aboard Harbinger, as Relin’s broken psyche consumes him.

Khedryn and Marr are useful characters to balance the seriousness of Jaden and Relin: neither are Jedi, and thus more carefree and, in their way, innocent. In fact, one thing that should be said about all the characters in Kemp’s first foray into the Star Wars universe is that they are all well-developed and three-dimensional. For such a short novel (only 300~ pages), Kemp manages to give us enough character development that feels natural, rather than just plot-driven necessity; I really hope these characters reappear in future novels in the series.

Kemp’s affection for Star Wars is evident throughout, as parallels can be drawn with the original three movies. For example, Farpoint, the Outer Rim outpost where Jaden meets his “rascal” companions, has the distinct feel of Mos Eisley: smugglers, salvagers, drinking dens, and the Underground existing and in charge of the ‘over-ground’. In fact, there are frequent homage to the original three movies – either through scene vignettes or snatches of dialogue that make me think of things Obi-Wan or Darth Vader might have said (particularly between Saes and Relin, and Relin and the short-lived Drev).

Kemp is a great new voice in Star Wars universe, and it would be great to read some more of his work, and certainly interesting if he were given another chance to write something in this universe. As well as giving the reader the action and themes usually indicative of Star Wars novels, he also manages to bring more alongside – the relationship between Khedryn and Marr, for example, is a great look at camaraderie, and their acceptance of Jaden only progresses this. Saes and Relin’s conflict is one that draws on loss, revenge, and desperation. All together, these make Crosscurrent not only an engaging mystery set in a familiar universe, but also a character-driven work of fiction. It is a very satisfying read, I must say.

One thing that surprised me the most, however, is how long it took for the events described in the synopsis to actually happen – the time-travel (a new element for the Star Wars universe, and executed very ably) only takes place in the second half of the novel. Thankfully, the events that preceded it did not make the novel feel slow or prolonged unnecessarily – a testament to Kemp’s gift for plotting. In fact, there were only two instances when I felt the pace flag a little; for the main, I rattled through this novel at considerable speed.

Engaging, more gritty than many novels in the series, and very finely written and plotted, Crosscurrent is a must for any fan of the series and movies.

[For those interested in where Crosscurrent fits into the greater ark of Star Wars fiction, it is preceded by Millennium Falcon and followed by Outcast.]

Posted by Civilian Reader at 1:58 PM