Just a quick post, highlighting some of the releases I’ve received this week for review. A lot from Orbit (always lovely), and a couple of others that were worth attention. First, however, a photo of the nice pile of books… 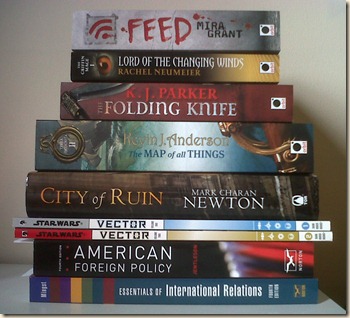 The bottom two are foreign policy/international relations books I’ve been sent for teaching/PhD, so probably not of as much interest to readers of this site. That being said, for those who are, Bruce Jentleson’s American Foreign Policy (Norton) is one of the best, accessible, and exhaustive introductions to US foreign policy available. This addition includes material on Obama’s presidency, and a few more case studies.

Now, to the fiction, which is far more interesting. (As before, I’ll provide synopses, artwork, and maybe a sentence or two of observation.) 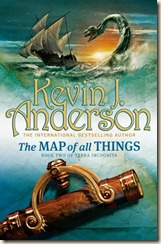 Kevin J. Anderson, “The Map of All Things” (Orbit)

After terrible atrocities by both sides, the religious war between Tierra and Uraba has spread and intensified: the series of skirmishes erupting into a full-blown crusade.

Now that the Uraban leader Soldan-Shah Omra has captured the ruined city of Ishalem, his construction teams discover a priceless ancient map in an underground vault – a map that can guide brave explorers to the mysterious Key to Creation. Omra dispatches his adoptive son Saan to sail east across the uncharted Middlesea on a quest to find it.

In Tierra, Captain Criston Vora has built a grand new vessel, and sets out to explore the great unknown and find the fabled land of Terravitae. But Criston cannot forget his previous voyage that ended in shipwreck and disaster . . . and the loss of his beloved wife Adrea – who is now the wife of the soldan-shah in far-off Uraba, fighting to survive against palace intrigues and constant threats against her life.

The sequel to The Edge of the World, I’ve been eagerly awaiting this novel ever since I finished the first in the series, which is one of my favourite fantasy novels ever. I imagine this will be reviewed pretty soon (it’s rather long, which is great, but does slow down the reviewing process…). Anticipation for this is very high indeed.

I’ve never been the biggest fan of zombie movies or books, but I’ve bee hearing an almost unanimously positive buzz surrounding this book. I shall endeavour to get to this as soon as possible, but I must admit that it’s not the highest on my priority list. 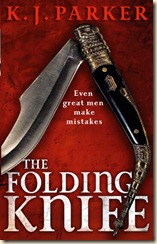 He is ruthless, cunning and, above all, lucky. He brings wealth, power and prestige to his people. But with power comes unwanted attention, and Basso must defend his nation and himself from threats foreign and domestic. In a lifetime of crucial decisions, he’s only ever made one mistake.

One mistake, though, can be enough.

I’ve always thought the premises of Parker’s novels are great. I’ve not read many, but The Company was very good, if a little slow. This, unfortunately, seems to be a standard criticism of Parker’s writing – that it can sometimes slow to an unbearable crawl. That being said, I love the political-intrigue-in-a-pseudo-Rome premise of The Folding Knife, so again this will be reviewed hopefully pretty soon.

The desert winds have come to the village of Menas Ford. Griffins, creatures of fire, have appeared in a burning haze, turning the sky a blazing golden-red and the land to dry, cracked earth. These majestic beasts, half-lion, half-eagle, spread the arid desert wherever they roam.

Iaor, the King of Feierabiand, will not tolerate the destruction of his people’s farmland. Sending forth his army, he means to rid the griffins from his domain – whether by negotiation or brute force.

But not all those who encounter the griffins fear them. Kes, a timid village girl with hidden mage powers, is summoned to heal the King of the Griffins himself. She will discover her affinity with these creatures, and may be the only one to understand the importance of their presence. For they are fleeing a menace which poses a greater threat to her people than even the blazing fires of the desert.

I’ve never heard of Rachel Neumeier before, but I’ve also not heard of much fantasy fiction where griffins take a central role. So, through perceived originality, I’m quite interested in giving this a try. It’s not too long, and the start of a series (The Griffin Mage), so there’s potential for long reading enjoyment if it’s well written. 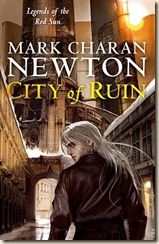 Amidst this chaos, Commander Brynd Lathraea, commander of the Night Guard, must plan the defence of Viliren against a race that has broken through from some other realm and already slaughtered hundreds of thousands of the Empire’s people.

When a Night Guard soldier goes missing, Brynd requests help from the recently arrived Inqusitor Jeryd. He discovers this is not the only disapearance the streets of Villiren. It seems that a serial killer of the most horrific kind is on the loose, taking hundreds of people from their own homes. A killer that cannot possibly be human.

I really enjoyed The Nights of Villjamur (which was one of the earliest books I reviewed for the site), the first in the Legends of the Red Sun series, even if it did take a little getting used to. This is, however, very high up on my to-read list, so expect the review just after I do Kevin J. Anderson’s The Map of All Things. 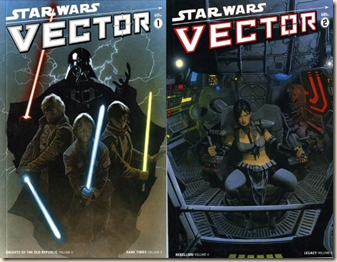 From the ancient past of ‘Knights of the Old Republic’ through to the grim, post-Yuuzhan Vong War future of ‘Legacy’, this is the ultimate "Star Wars" event!

When the secret Jedi Covenant are horrified by a vision of the far future, operative Celeste Morne is despatched to the planet Taris, where she encounters an ancient Sith artefact, a Mandalorian army, and rogue Padawan Zayne Carrick. Then, four thousand years later, the crew of the Uhumele also meet Celeste Morne - and the dread Sith lord Darth Vader.

I’ve never reviewed a graphic novel before, but I’ve got a lot of Star Wars books coming in the near future, so I figured I’d review them for the site. (I had to take out all the “!”s in the synopsis, tone it down, because it was a little ridiculous.) First up, Part 1 of Vector, which I should do sometime this week, work permitting. I’ll review part 2 later, as it falls in the middle of the Legacy story, which I won’t have for a little while, but will be reviewed on here. It’s also a long time since I read any Star Wars graphic novels, so it will be a rather nostalgic endeavour, I’m sure. 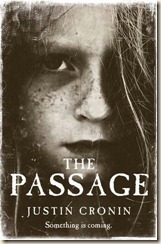 Amy Harper Bellafonte is six years old and her mother thinks she's the most important person in the whole world. She is.

Anthony Carter doesn't think he could ever be in a worse place than Death Row. He's wrong.

FBI agent Brad Wolgast thinks something beyond imagination is coming. It is.

Deep in the jungles of eastern Colombia, Professor Jonas Lear has finally found what he's been searching for - and wishes to God he hadn't. In Memphis, Tennessee, a six-year-old girl called Amy is left at the convent of the Sisters of Mercy and wonders why her mother has abandoned her. In a maximum security jail in Nevada, a convicted murderer called Giles Babcock has the same strange nightmare, over and over again, while he waits for a lethal injection. In a remote community in the California mountains, a young man called Peter waits for his beloved brother to return home, so he can kill him.

Bound together in ways they cannot comprehend, for each of them a door is about to open into a future they could not have imagined. And a journey is about to begin. An epic journey that will take them through a world transformed by man's darkest dreams, to the very heart of what it means to be human.

This is a much-hyped beast of a novel from debut author Cronin. I’m not 100% sure what sort of novel it is, but the buzz surrounding it is hard to ignore. I received this through Amazon’s Vine Program, so I’ll get to it pretty soon, with luck, but considering the roster of other weighty tomes that need to be read before this, it might still take some time. I’m eager to get to it, though.

So, those are the books that deserve the most attention of late (there are others, but I’ll be reviewing them before these, so thought they didn’t need quite as much exposure).

Needless to say, I am going to be busy happily reading through all of these over the next couple of months.

Posted by Civilian Reader at 4:51 PM