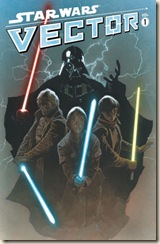 I’ve never reviewed a graphic novel before, so I’m not entirely sure how to go about it. Also, given the number of people involved, it will require a slightly different format.

Star Wars: Vector is an attempt by the powers that be at Dark Horse to create their first era-spanning Star Wars story arc, in the same vein as the highly successful Marvel and DC cross-over series. It is comprised of four parts, each from one of the Star Wars comic book series: Knights of the Old Republic, Dark Times, Rebellion, and Legacy. I shall deal with each part separately here and in another review, which I will do in the future (more on that at the end of this post).

What begins as a vision of a Sith threat stretching far into the future becomes a dangerous mission for Jedi operative Celeste Morne. Dispatched to a war zone, Celeste must prevent the object from the vision – a Sith artifact known as the Muur Talisman – from falling into the hands of the Mandalorian invaders. But when she crosses paths with Zayne Carrick, a Jedi Padawan who has been framed for murder by Celeste’s masters, her mission begins to unravel, putting her on a collision course with the power of the Talisman and a Mandalorian army set to attack the Republic.

Being used to reading the novels set in the Star Wars universe, it took  a little longer for me to get used to the writing style – not to mention the comic medium – of Vector. The writing is a little more simple, and a little more sensational, which was disappointing, given that graphic novels are not just meant for kids. That being said, it was interesting to see how the Star Wars universe is portrayed in other mediums beyond the movies, video games and the novels.

Jackson’s script is interesting and the interaction between Zayne and Gryph is fun and adds a lighter touch to proceedings. Morne is highly serious, focussed and cranky, which adds an opposite voice and perspective. The end of the first chapter of Vector was certainly effecting, featuring a noble act of sacrifice and a terrible – yet necessary – act.

The art is intriguing, and certainly very colourful, bringing the universe to life on the page. I do have one criticism, though, and this is probably an odd one: chins. For some reason, everyone’s chin or jaw-line seems to distort quite dramatically at time, which makes Morne come across slightly simian in some panels. A minor point, but it’s something that niggled at me.

This part of the series actually made me really interesting in reading the rest of the Knights of the Old Republic series, but I’m not sure if I’ll get a chance to any time soon. I will certainly keep my eye out for the books, though. 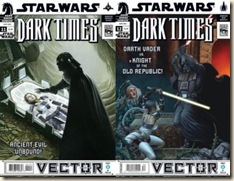 More than four thousand years later, in the aftermath of the Republic’s transformation into the Empire, the potential power of the Talismn comes to the attention of Darth Vader. Luring the smugglers who are unwittingly in possession of the artefact to a remote moon, Vader plans to acquire the artefact for himself. But the Talisman – and the malevolent spirit of the ancient Sith which resides within – has not survived the centuries alone. To claim his prize, Vader must face not only powerful Sith magic, but the fury of a Jedi Knight of the Old Republic.

My immediate observation for this second chapter in the Vector line, is that it is a lot darker and grittier (at least, as much as Star Wars can get away with). Everything from Mick Harrison’s story, to Douglas Wheatley and Dave Ross’s art, and Dave McCaig’s colouring, gives this part a darker, gloomier and slightly sinister feel (appropriate, given the title of the timeline it’s in). The centrality of Vader is great – and should appeal to fans of The Force Unleashed (which, strangely, I still haven’t read; but I have recently purchased the game) and anything else Vader-related.

The story for this chapter of Vector is much shorter, which was a pity, given how well written and drawn it was. We learn a little more about Vader, a tiny bit more about the Talisman and the Dark Side. Just as with the first chapter in the series, I was sufficiently intrigued by the Dark Times setting that this is another series I would be interested in exploring more of.

Overall, then, I would say I’m glad I read this, and I’m glad I’ve got the second book already, as well as the first three Legacy books on the way. It’s been a really long time since I last read a proper graphic novel (the Obama one doesn’t count), and it was a very nostalgic experience. I don’t think they’ll ever replace novels, as they don’t feel as involved or as satisfying as a 300+ page novel.

As a big fan of the Star Wars universe and mythos, I certainly welcome anything new that can expand on the overall story. An interesting and rewarding reading experience.

The final two parts of the Vector timeline will be reviewed later, as I am also working on a review of the Legacy series, of which the final part of Vector forms a crucial part. In order to not spoil the story of Legacy, therefore, I will postpone the second Vector review until I catch up with Legacy.

Posted by Civilian Reader at 2:32 AM