Ah, it’s that time of year again, when more information is released about Terry Pratchett’s next release. This time, it’s another Tiffany Aching novel (young adult series), and it’s called I Shall Wear Midnight. Amazon UK have the artwork, which is below (sorry for the poor quality image, it’s a screen-capture): 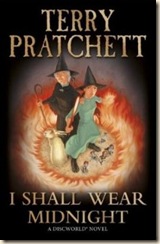 I’ve not been able to find a synopsis, although one frequent piece of information is that it is the “concluding” novel of the Tiffany Aching series.

I’ve also managed to find the possible US artwork: 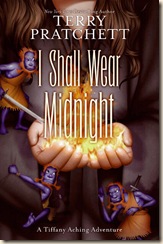 I’ve liked this series ever since the first book, The Wee Free Men. The story was great, the characters interesting and all with the Pratchett magic touch. Particularly for me, the Wee Free Men themselves – or, the Nac Mac Feegle, as they are really known – are a genius creation from an author who has already given us so many interesting creatures and so much entertainment.

[On a slightly-related note, the next Moist Van Lipwig novel will apparently be called Raising Taxes, but not sure when it will appear]