Quick Reviews: “The Cuckoo’s Calling” and “The Silkworm” by Robert Galbraith (Sphere/Mulholland) 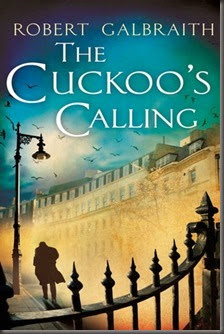 When a troubled model falls to her death from a snow-covered Mayfair balcony, it is assumed that she has committed suicide. However, her brother has his doubts, and calls in private investigator Cormoran Strike to look into the case.

Strike is a war veteran – wounded both physically and psychologically – and his life is in disarray. The case gives him a financial lifeline, but it comes at a personal cost: the more he delves into the young model’s complex world, the darker things get – and the closer he gets to terrible danger…

I am not entirely sure how to review these novels. To discuss their plots at any length would ruin the plots – something that’s normal, but for some reason feels even more so the case here. The characters, however, are superb – and it is Cormoran Strike, Robin and their supporting cast that make these novels so good. If you haven’t read this series, yet, I strongly urge you to do so.

Let’s get one thing out of the way: even though I knew Robert Galbraith was actually J.K. Rowling when I read The Cuckoo’s Calling, there was nothing in the text that would have told me it was her. While reading and thinking about it, I spotted things that reminded me of certain stylistic mannerisms, but I only spotted them because I knew it was Rowling before starting. Nor, really, was there anything that would have told me Galbraith was actually female – I just thought it was a very well-constructed, detail-oriented style filled with nice touches throughout. [If I’m being really honest, I think anyone who claims to have ‘known’ it was Rowling is talking crap.]

Right. Cormoran Strike is a great protagonist: an Afghanistan war vet with a prosthetic leg, a famous dead-beat father, and a P.I. firm of one. He is a bit of a curmudgeon, not too far from the archetype of such a private investigator. His internal monologue is great, and he is realistic and well-drawn. His interactions with Robin, his new assistant at the start of The Cuckoo’s Calling, are excellent – alternating between the humorous, parental, mentor-like, and natural. Robin is a fantastic character as well, and a welcome balance to Strike’s curmudgeonly, world-weary and cynical air. In The Silkworm, she is fleshed out a lot more, and features more prominently in their case. There still certain things from her past that are unrevealed, but I hope we get more in future novels. 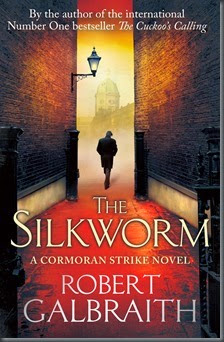 The two cases are pretty different, but both focus on different industries of fame: first, the fashion industry; second, publishing and the literati. If I had just one criticism, it would be the rather sudden inspirational leaps that lead to solving each case. That being said, they usually do come very near the end of the book, after pretty intense and circuitous investigations. I did like that Galbraith leaves the reveal until Strike confronts the antagonists. Both of the novels offer plenty of commentary – a mixture of praise and judgement – on both of their respective industries. For me, that in The Silkworm, on the publishing industry was more relatable and therefore more engaging. It’s a nice, amusing critique of the gossipy nature of British publishing, as well as offering some minor, parenthetical thoughts on the march of digital publishing (self-publishing, eBooks, and so forth), and other shifts in the industry.

One thing that surprised me is that it took me rather a long time to read each of these novels. By no means was it because I didn’t like them – I liked them both from the first page of The Cuckoo’s Calling until the final page of The Silkworm, there wasn’t a moment when I felt bored, or like the story was stuck, or treading water. They are, I think, just novels that aren’t in a hurry to reveal their secrets or tell their stories. They are novels that, strangely given the genre, are best savoured at a leisurely pace. (Although, Alyssa still managed to polish off The Cuckoo’s Calling in one day…)

So, to sum up. Read these novels. They are superb examples of their genre, written by an author who’s forging a new identity and path in a new genre. I absolutely enjoyed both The Cuckoo’s Calling and The Silkworm. Very highly recommended. I can’t wait for the next book in the series.

I really must go back and read The Casual Vacancy…

I received the review copy of The Silkworm from Sainsbury’s eBooks. The novel is published in North America by Mulholland Books. Here’s the synopsis for the second novel:

When novelist Owen Quine goes missing, his wife calls in private detective Cormoran Strike. At first, she just thinks he has gone off by himself for a few days – as he has done before – and she wants Strike to find him and bring him home.

But as Strike investigates, it becomes clear that there is more to Quine’s disappearance than his wife realises. The novelist has just completed a manuscript featuring poisonous pen-portraits of almost everyone he knows. If the novel were published it would ruin lives – so there are a lot of people who might want to silence him.

And when Quine is found brutally murdered in bizarre circumstances, it becomes a race against time to understand the motivation of a ruthless killer, a killer unlike any he has encountered before…

Posted by Civilian Reader at 8:35 PM