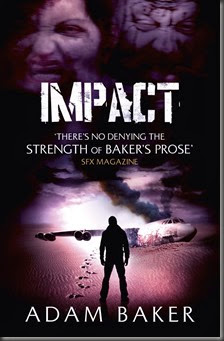 The world is overrun by an unimaginable horror. The few surviving humans are scattered in tiny outposts across the world, hoping for reprieve – or death. Waiting on the runway of the abandoned Las Vegas airport sits the B-52 bomber Liberty Bell, revving up for its last, desperate mission. On board – five crew members and one 10-kiloton nuclear payload. The target is a secret compound in the middle of the world's most inhospitable desert.

Impact is the gripping, suspenseful fourth novel set in Baker’s post-apocalyptic reality. Everything I liked about Terminus, the previous novel in the series, is evident here: the tightly-plotted story, the stripped-down prose, realistic characters, sinister atmosphere, and addictive, chilling suspense. From the first page until the last, I was hooked.

The antagonists in the series – a type of zombie, infected with an organism that presents with metallic carcinomas and a hunger for humans – seem to be evolving. While our protagonists try to survive in the blistering heat of day and freezing cold of night, they get the impression that they’re being toyed with. As their various injuries and dehydration start to take a toll, they have to decide whether or not they should strike out to fulfill their mission, seek shelter and a modicum of safety (for, in reality, very few places in the world are now safe), or simply to give up. Unbeknownst to them, a handful of fellow humans are trying to get to them to help, but they too become victims to the hostile environment and the stalking zombies.

Because the narrative drives ever forward, never letting up for a moment, it’s difficult to talk about the plot in much detail without spoiling it. Needless to say, I found this novel gripping and as good as Terminus, which was easily one of my favourite reads of 2013. While I haven’t yet got around to reading Outpost and Juggernaut, they are very high on my catch-up TBR list.

If you haven’t read Baker yet, I strongly urge you to do so. Survival horror at its absolute best, this is a must-read of 2014.

Adam Baker’s Impact is published by Hodder Books today in the UK. For more information about Adam’s writing and novels, be sure to follow him on Facebook and Twitter. 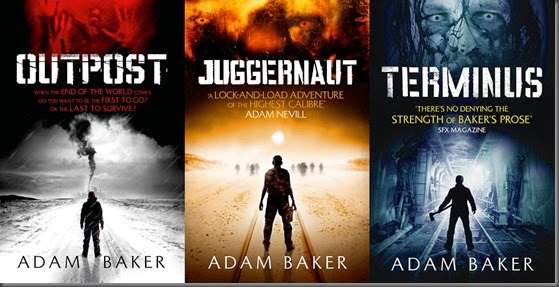