Upcoming: WE ARE NOT GOOD PEOPLE by Jeff Somers (Gallery) 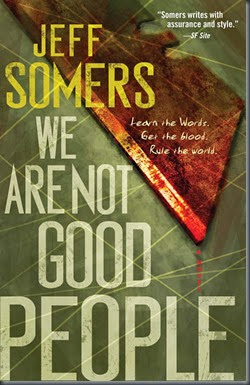 This seems to be a re-issue of the author’s previous urban fantasy, Trickster.

According to the publisher’s page, this is “Book One in the Ustari Cycle, the first portion of We Are Not Good People was originally published in an altered form as Trickster (Pocket Books)”. Not sure what this means for people (like me) who bought Trickster, or how “altered” this version will be, but here’s the synopsis for this version:

The ethics in a world of blood are gray – and an underground strata of blood magicians has been engineering disasters for centuries in order to acquire enough fuel for their spells. They are not good people.

Some practitioners, however, use the Words and a swipe of the blade to cast simpler spells, such as Charms and Cantrips to gas up $1 bills so they appear to be $20s. Lem Vonnegan and his sidekick Mags fall into this level of mage, hustlers and con men all. Lem tries to be ethical by using only his own blood, by not using Bleeders or “volunteers.” But it makes life hard. Soon they might have to get honest work.

When the pair encounters a girl who’s been kidnapped and marked up with magic runes for a ritual spell, it’s clear they’re in over their heads. Turning to Lem’s estranged master for help, they are told that not only is the girl’s life all but forfeit, but that the world’s preeminent mage, Mika Renar, has earth-shattering plans for her—and Lem just got in the way. With the fate of the world on the line, and Lem both spooked and intrigued by the mysterious girl, the other nominates him to become the huckleberry who’ll take down Renar. But even if he, Mags, and the simpletons who follow him prevail, they’re dealing with the kind of power that doesn’t understand defeat, or mercy.

We Are Not Good People is due to be published by Gallery Books (Simon & Schuster) in October 2014. One thing that’s clear to me is that the publisher is aiming for a new – or at least broader – audience: this cover is less “urban fantasy” and a bit more thriller. I’d love to know what, if any, difference this makes to its sales figures.