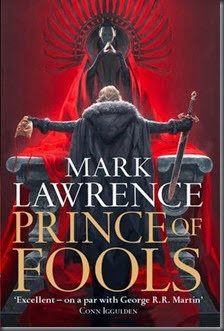 A new trilogy, a hero, and still just as good…

The Red Queen is old but the kings of the Broken Empire fear her as they fear no other.

Her grandson Jalan Kendeth is a coward, a cheat and a womaniser; and tenth in line to the throne. While his grandmother shapes the destiny of millions, Prince Jalan pursues his debauched pleasures. Until he gets entangled with Snorri ver Snagason, a huge Norse axe man, and dragged against his will to the icy north.

In a journey across half the Broken Empire, Jalan flees minions of the Dead King, agrees to duel an upstart prince named Jorg Ancrath, and meets the ice witch, Skilfar, all the time seeking a way to part company with Snorri before the Norseman’s quest leads them to face his enemies in the black fort on the edge of the Bitter Ice.

Experience does not lend Jalan wisdom; but here and there he unearths a corner of the truth. He discovers that they are all pieces on a board, pieces that may be being played in the long, secret war the Red Queen has waged throughout her reign, against the powers that stand behind thrones and nations, and for higher stakes than land or gold.

Mark Lawrence returns with the first in a great new trilogy set in the same world as his critically-acclaimed Broken Empire trilogy. As long-time readers of the blog will know, I really enjoyed Lawrence’s debut, Prince of Thorns. He is without doubt one of the best new fantasy authors, and if you like your fantasy dark, twisty, and very well-written, then you really do need to give his work a try. Prince of Fools introduces us to a new pair of heroes – Prince Jalan and his Viking companion, Snorri. I really enjoyed this novel.

I am presented with two conflicting observations after finishing Prince of Fools. The first is that it didn’t feel like a 500 page novel. I read it quicker than I do most other novels of that length, and that was without staying up well into the night to read just one more chapter more. This is no bad thing at all.

What’s conflicting, though, is that I think Prince of Thorns did a lot more with less. It’s something that has stuck with me ever since I read Lawrence’s debut, back in 2011, and then King of Thorns. Lawrence’s debut was an extremely focused, tightly-plotted novel. Both King of Thorns and Prince of Fools feel distinctly different: they are far more expansive, more detailed. For many people, this will be welcome news and joyously welcomed. I enjoyed King of Thorns and Prince of Fools, of course, but because Prince of Thorns was just so focused and briskly-paced (I read it in two sittings), I’ve found both of the novels I’ve read by Lawrence since to be a little slow. It’s also kind of strange: a fantasy debut being the shorter of an author’s books? Usually it goes the other way, if they’re still hitting annual deadlines, and so forth.

Anyway. That sounds like a greater criticism than it is – I only meant it as an observation. The pace of Prince of Fools is measured and, at times, slightly meandering. That being said, I was burning through the pages at a considerable pace, which was more down to my investment in the characters and story than Lawrence’s prose (he’s describing things more, adding more flourishes). The expansion of the setting (a far-future, post-technological dystopia) is certainly welcome, of course, and the characters are interesting, engaging and relatable. I just wish we weren’t given quite as much detail, and that some more of it was left to the reader to fill in. For example, Jal’s personality started to feel over-described in the first 150 pages, and I did think to myself, “I get it: he’s very different from Jorg. Let’s move on and see how he changes.” Which, of course, he does – and in a very good way. 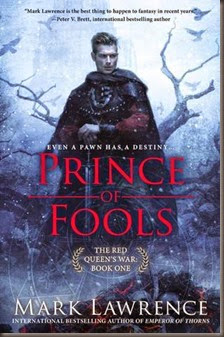 Prince of Fools is an entertaining change to the Broken Empire trilogy. It is by no means less gritty or intense, mind. Prince Jal is sufficiently ungentlemanly and anti-heroic, though on a quite different part of the spectrum to Jorg. He’s something of a grimdark Flashman: womaniser, gambler, debonair (he thinks), and coward. Like Flashman and characters of that type, though, he has an uncanny knack for failing as a coward: despite fleeing or hiding, his actions have a way of being interpreted as heroism or skill. (For example: fleeing one battle and accidentally joining another…) When we first meet him, he’s fleeing from the head of the DeVeer family, having spent the night with a beautiful daughter. Lawrence then takes us on a relatively quick tour of the Vermillion society and Jalan’s family. It’s well done, and we learn of his place in and opinion of the royal family; his debts and creditors; his proclivities and pursuits. We’re situated very well. Then it goes on for just a little longer than necessary.

We are also introduced to Snorri ver Snagason, who makes quite the first and second impressions on the reader and also, more importantly, on Jal. Thankfully, he sticks around, and he quickly became one of my favourite of Lawrence’s characters. Pulled together against their wills, with wildly different goals and ambitions, Jal and Snorri were an exercise in contrasts. While Jal is selfish and a playboy, Snorri is fiercely focused on seeking revenge on the man who destroyed his home and kidnapped his wife and child. The fact that Snorri is far more competent and worldly than Jal was a pleasant development. Jal sees him initially as an uneducated barbarian Northman, who could make him some money in the fighting pits. As the novel progresses, though, we learn that Snorri is actually highly competent and worldly, not to mention compassionate and far more nuanced than Jal. They’re a great pair of protagonists, each of which brings something different to the story and helps the other to cope and evolve to confront their situation. I really liked the bond they developed over the course of the story.

And it’s quite the story, too. The overarching plot of the trilogy is still somewhat hidden from the reader, as Prince of Fools seemed far more interested in helping us get to know our two new heroes. The story does tie in with the first trilogy, though it is by no means essential to have read those three novels to enjoy and follow this one. You may miss a couple of the cameos, though. Ultimately, what you need to know is, as Snorri tells Jal at one point,

“The Dead King and this Silent Sister, they’re hidden hands, they play a game across the empire, them and others, pushing kings and lords across their board. Who knows what it is they want in the end? Perhaps to remake the empire and give it an emperor with strings by which he can be made to dance, or perhaps to wipe the board clear and start the game anew…”

We follow the two heroes as they travel north, seeking to break the curse that they have acquired, and also find closure for Snorri and his family. We’re taken on a tour of the realms, and meet plenty of colourful characters along the way.

Overall, then, I would say this is another great novel from Mark Lawrence. You can start here, or read the Broken Empire trilogy. Either way, I would certainly recommend them very highly. I do miss the tighter plotting and pacing of Prince of Thorns, but these books are nevertheless still among the best modern fantasy novels available. I’m very much looking forward to reading the next one. (King of Fools, maybe?)

Prince of Fools is published this week in the UK, by Voyager Books. Ace Books publishes in the US.

Also on CR: Interview with Mark Lawrence (2011); Reviews of Prince of Thorns and King of Thorns