Quick Review: “The Truth of Valour” by Tanya Huff (Titan) 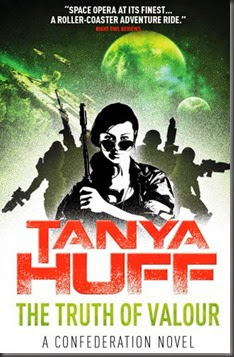 I am a big fan of Tanya Huff’s writing, and have read almost all of the novels Titan Books has issued in the UK. The Silvered was a very good fantasy novel (more please!) and the Torin Kerr/Confederation novels have been particularly excellent. The Truth of Valour sees some major changes to Torin’s life and adventures. While I didn’t think it was quite as good as the first four novels in the series, it was nevertheless a gripping, entertaining read.

As the synopsis states, Torin Kerr has left the marines. Now a civilian, our heroine must adjust to her new life. Unfortunately, a series of unfortunate events means that she can’t quite hang up her fighting skills just yet. After the pirate attack mentioned in the synopsis, she is forced back into action in order to save Craig.

Much of what I loved from the first two books remains – the tight writing, Torin herself, and the very well-written action scenes. However, the action felt different, this time. Perhaps, with the lack of a military framework, the violence feels more brutal, more prominent for some reason. When in the army, Kerr’s story was more about protecting her comrades and solving a problem. She also was, effectively, in charge of inter-species relations. She was the oil in a complex and difficult machine. Here, however, she’s still solving a problem (captured love interest), but the camaraderie aspect felt peripheral – she teams up with some fellow ex-military pals, though they weren’t focused on, much. The more action-adventure aspect of the story, as opposed to military sci-fi, may be a welcome change for many – and, indeed, it did make sure this novel differed from previous and avoided repetition, or treading well-worn ground.

Nevertheless, the novel is still a lot of fun, and I read it pretty quickly. Torin remains a great character, the plot still moves briskly, and Huff’s prose is as good as ever. If you haven’t tried out the series, yet, I really recommend it – it’s engaging, very well-written, and addictive. I’m really looking forward to the next novel in the series, Peacemaker (not sure when it’ll be published).

Posted by Civilian Reader at 3:31 PM