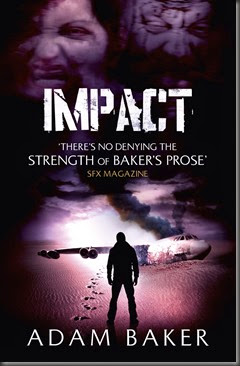 I came rather late to Adam Baker’s novels. As I’m sure I’ve mentioned elsewhere on the blog, for some reason I never got around to reading Outpost or Juggernaut. That changed with Terminus, which I read and loved last year. This morning, I was greeted with a lovely surprise when Impact arrived in the mail from Hodder. I hadn’t been aware it was on the way (it’s not listed on Goodreads, yet), and I am very eager to get it. I’ll probably read it next week. It sounds great…

The world is overrun by an unimaginable horror. The few surviving humans are scattered in tiny outposts across the world, hoping for reprieve – or death.

Waiting on the runway of the abandoned Las Vegas airport sits the B-52 bomber Liberty Bell, revving up for its last, desperate mission. On board – six crew members and one 10-kiloton nuclear payload. The target is a secret compound in the middle of the world’s most inhospitable desert.