“The Gospel of Loki” by Joanne M. Harris (Gollancz) 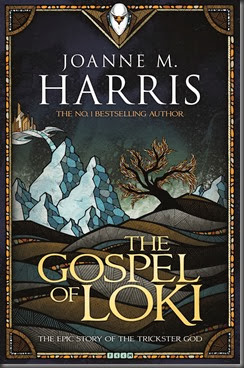 An excellent, modern take on the beloved Trickster

“Loki, the Light-Bringer, the misunderstood, the elusive, the handsome and modest hero of this particular tissue of lies. Take it with a pinch of salt, but it’s at least as true as the official version, and, dare I say it, more entertaining.

“So far, history, such as it is, has cast me in a rather unflattering role.

“Now it’s my turn to take the stage.”

I’ve mentioned before how Loki seems to be everywhere, these days. From comic books to blockbusters, the Trickster is just growing in popularity. Now we have The Gospel Of Loki, Joanne Harris’s first fantasy novel for adults. Unsurprisingly, given Harris’s well-established gifts as a writer, this is a well-written, engaging novel. It’s quirky, amusing throughout, with an undercurrent of darkness and menace. This is a lot of fun.

The Gospel of Loki follows Loki’s tale from the moment he is recruitment by Odin from the realm of Chaos (where he was the embodiment of Wildfire). We then follow him as he learns how to navigates the petty politics and squabbles of Asgard; developing a reputation as the go-to man of Asgard, as he inadvertently solves some peculiar problems with deftness and guile – appealing to his fellow gods’ vanity and arrogance. The story follows him as he eventually marries Sigyn (wholly unsuited to his character, and amusingly naïve in many ways – but at least Loki likes her jam tarts…), and also his dalliances with others (including a horse and another demon). The story then details his fall from grace, and the build-up to Ragnarok.

The novel starts off very amusing indeed, and just reading the Dramatis Personae had me chuckling. Harris writes very accessible, fluid prose, which will grab the reader and pull them on through the story – certainly, this is the effect they had on me. I found myself blitzing through The Gospel of Loki, well into the wee hours on two occasions (it didn’t take me long enough to read this for there to be a third night of reading). The story is sparsely narrated, which I think was a good choice – there was the possibility that the author’s love for the subject matter (she is currently studying Old Norse, according to the author bio) may have resulted in over-description or lingering examinations/explanations of the characters, history, and so forth. Thankfully, Harris has focused on writing a damn good tale. True, events move fast, but that is perhaps just as much a result of Harris’s streamlined storytelling, than it is from a conscious desire to keep things short.

Our eponymous narrator is impish and unreliable, as one can imagine. The story  is told in the first person, and entirely from his perspective. We get his unvarnished opinions of his fellow  Asgardians, and also of the Folk (Rock, Ice, and humans). He is a very amusing guide to the world, and even his more malicious acts are shrouded in a gallows or farcical humour.

There was very little I didn’t love about the novel. In fact, there are only two things that stand out as not-quite-right for me. First, the novel features a fair bit of modern phraseology and dialogue, which sometimes jarred me out of the setting. I found its appearance a little weird. For example:

“I'm only keeping in touch with you for the sake of the children. Way to look after your son, by the way. I let you have him for the weekend and before I know it he’s chained underground, awaiting Last Times and stinking of mead.”

(It’s the “way” that did it for me…) There was also a scene that was clearly parodying a modern-day negotiation with a contractor (with a stated need to get an estimate, etc); and at one point, Loki uses the modern day “like” mannerism, which made him sound a bit like a Valley Girl… Nevertheless, this is a rather minor concern. Loki’s narration and insouciance pulled me ever further into the tale, and I ended up reading this very fast. The way Harris has written these familiar characters is interesting, and all of them have been rounded-out rather nicely (flaws and all). Even the less pleasant or monstrous ones have their endearing moments.

Also, the second thing that confused me: why are Hugin and Munin, Odin’s ravens (his Spirit and Mind) Scottish when they’re in their human Aspect…? This was just weird. Amusing, but weird.

When reading, “One more chapter” was never enough…

The novel is not all levity or comedy, however. The story actually gets darker as it progresses, and Harris handles the change in tone in a really interesting and skillful way. Often, the shift revolves around sudden or specific events – for example, when Odin bestows upon Freyja her second aspect (approximately a third into the novel). They are woven into the story so well that they seem to come out of nowhere, and yet make perfect sense. As the novel progress, Loki’s impish behaviour is slowly replaced by his ever-more dangerous machinations as he plays out his long revenge game.

The Gospel of Loki is a wonderfully imaginative, inviting twist on Norse mythology and legends. It’s very accessible, briskly paced and tightly written. Save for the modern turns of phrase, this is a pretty fantastic novel. The momentum builds brilliantly towards a cataclysmic Ragnarok, which is handled just right (neither excessively action-packed, nor skimmed over). The very last page offers a rather nice tease, too.

Overall, therefore, this is a highly recommended, fun alternative mythology. A must-read for all fans of Norse legends, fantasy, and great writing.

The Gospel of Loki is published next week in the UK, by Gollancz. Harris’s other Norse-influenced fiction includes Runemarks and Runelight are also available now (published by Corgi/Doubleday)

Readers looking for a darker take on Norse mythology – specifically, that of Fenris, should check out M.D. Lachlan’s Wolfsangel, Fenrir and Lord of Slaughter (also published by Gollancz).