Mini-Review: “Honour to the Dead” by Gav Thorpe (Black Library) 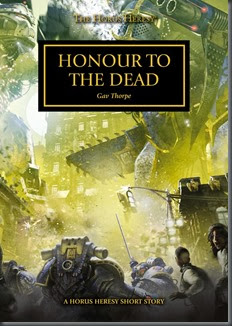 The prose version of an audio-drama

As Calth burns, the Battle Titans of the Fire Masters legion take to the streets of the city of Ithraca, ready to massacre the fleeing civilian population in the name of their new, dark masters. But the remaining loyalist engines of the Legio Praesagius – the True Messengers – still stand ready to defend the Imperium, even in the face of almost certain death. With the nearby Ultramarines forces scattered and lost, the people of Ithraca must fend for themselves as gigantic war machines unleash apocalyptic weaponry across the ravaged skyline...

This is a pretty good short story. It doesn’t really require a particularly long review, however. It was nice to see Titans featured a bit more prominently, and to see first-hand their devastating, over-the-top capabilities.

Near the beginning, there were a few very sudden changes in P.O.V. or scene, without properly-delineated shifts, which threw me a couple times. I quickly dropped back into the narrative, however. I also liked the variety of perspectives, offering not only that of opposing Astartes factions (Ultramarines, for example), but also Titan crews and mere mortals and survivors of the bombed out city.

The only real weakness to the story was Princeps Tyhe (the princeps of a renegade Warhound titan), who speaks like a bad, pulp villain:

“Is it not beautiful, my sweet? ... See the ants spilling from their nests to be crushed. So weak and pathetic. But kill them we must! Our comrades in the Word Bearers require deaths, and deaths we shall give them. Deaths by the dozen! Death by the hundred, by the thousand!”

He even delivers a long, Evil Villain Monologue, one page later. I couldn’t help but cringe a little, whenever he was speaking.

Overall, then, this is certainly not Thorpe’s best work. But, it is nevertheless an enjoyable, quick read for a gap between novels. It doesn’t come close to matching the quality of Deliverance Lost or any of Thorpe’s other Horus Heresy fiction.