Short Story Reviews: “Forsworn” and “The Face in the Window” by Brian McClellan

A pair of short stories set in the world of McClellan’s Powder Mage fantasy series. McClellan continues to impress and these two stories (which follow previous short stories The Girl of Hrusch Avenue and Hope’s End) do a wonderful job of adding more to the world he’s creating. And heightening my anticipation for The Crimson Campaign… 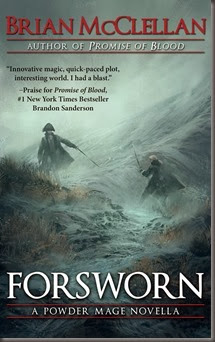 Erika ja Leora is a powder mage in northern Kez, a place where that particular sorcery is punishable by death. She is only protected by her family name and her position as heir to a duchy.

When she decides to help a young commoner — a powder mage marked for death, fugitive from the law — she puts her life and family reputation at risk and sets off to deliver her new ward to the safety of Adro while playing cat and mouse with the king’s own mage hunters and their captain, Duke Nikslaus.

Occurs 35 years before the events in Promise of Blood.

This is a great novella. This time, we’re in Kez, and we learn about their strict censure of powder mages – lowborn mages are executed, but highborn mages can forswear their gifts and live (branded). It is set a long while before the novel, as is mentioned above, and it’s only at the end that McClellan connects it with Tamas and his revolution. I really liked the way he wrote all of the characters. The story is very well-paced, and the fight scenes are expertly done. The author continues to impress, the more of his work I read. 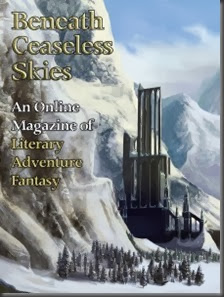 THE FACE IN THE WINDOW

Taking place two years before the events in Promise of Blood, “The Face in the Window” relates the story of Taniel’s trip to Fatrasta and his first meeting with a mysterious girl named Ka-poel.

Published in Beneath Ceaseless Skies issue #140.

The author announced this rather suddenly on his website and via Twitter, just as I was finishing Forsworn. Naturally, I went straight to Amazon and bought it… It’s a great story, too, one that has a slow build to a sudden, appropriate ending. It was great to read of Taniel’s first meeting with Ka-poel (my favourite character from Promise of Blood, probably). It’s set in the muggy, oppressive, dragon-infested swamps, and Taniel attaches himself to a regiment who end up devastated by their enemies. With Ka-poel’s help, he seeks revenge on the Privileged who murdered his company.

Much shorter than Forsworn, McClellan nevertheless offers a satisfying story. You don’t have to have read Promise of Blood, but you will probably get a bit more out of “The Face in the Window” if you have.

Brian McClellan’s Promise of Blood is published in the UK and US by Orbit Books. The next novel in the series, The Crimson Campaign is due to be published in May 2014. I can’t wait!

Posted by Civilian Reader at 11:30 AM