Princeless Vol.1 – “Save Yourself” (Action Lab) 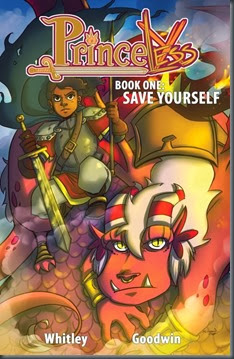 Princeless is the story of Princess Adrienne, one princess who’s tired of waiting to be rescued. Join Adrienne, her guardian dragon, Sparky, and their plucky friend Bedelia as they begin their own quest in this one of a kind, action packed, all-ages adventure!

This was a very pleasant surprise. It’s a progressive, all-ages comic book that should have massive appeal across age groups. The story is witty, well-written, and the artwork is filled with amusing and eye-catching details. I really enjoyed this, and think a lot of others will, too.

The story and ‘message’ (not wanting to get too academic about this) is also very good. It’s a story about a princess rebelling against the Fantasy/Fairy Tale Archetypes. It begins with her shrewdly pointing out the idiocy of sticking princesses in towers in the middle of nowhere guarded by hungry dragons. It’s the only time the financial flaw in such a plan has been pointed out… The rest of the book picks up on a number of fantasy tropes, not to mention the archaic conventions related to women (young, old, noble, and peasant). There were so many scenes that made me laugh or smile. Not only the moment when our heroine discovered the sword under her bed (“Oooh. Shiny.”); but also the excellent scene in which she acquires her own, proper armour. 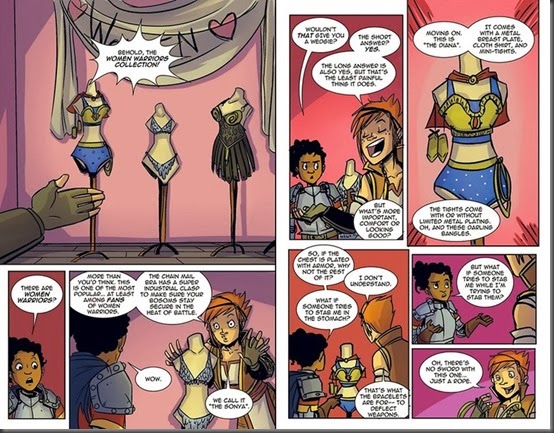 I won’t go into any more detail than that, as I think it would ruin many of the other jokes. You’ll find a great protagonist in Adrienne, you’ll grow attached to her new (almost Chewbacca-meets-dog) dragon companion, her zany new ally, and her brother is pretty great, too. I urge everyone to read this. If it found its way into the hands of young readers everywhere, as well as adults’, then it could do a lot for breaking down gender barriers in storytelling and genre fiction/media (in the long and short term).

Princeless is a must-read for anyone looking for a progressive, fun comic book. Also perfect for anyone who enjoyed Frozen and other similar movies. I really can’t wait to read volume two. Very highly recommended.

Posted by Civilian Reader at 10:06 PM