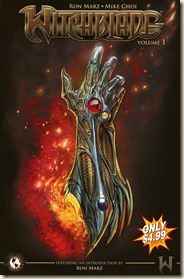 A great place to start with Witchblade

Witchblade bearer and New York City Police Detective Sara Pezzini is found unconscious, having been beaten by an unknown attacker. The only clues as to what happened are the cryptic offerings of an antique shop owner who has a surprising knowledge of the Witchblade. Now Sara must uncover the mystery in order to defend the city, and the world, she was chosen to protect.

This book is the beginning of a new take on the Witchblade series and character. Sara Pezzini remains the bearer of the eponymous weapon, and Witch Hunt kicks off a whole new story, with a couple of new characters thrown into the mix. It’s a brilliant starting point to this great series. I really enjoyed this book – it ticks off a number of fictional elements that I always seem to like (thriller, supernatural, action, and so forth). It’s also stunning to look at.

First off, and it’s difficult not to start any discussion of this series on another note: the artwork is amazing. It’s really superb in every way: vibrant, sharp, stylish (bodies are only slightly exaggerated, and yes females more than males); the colouring and shading manages to enhance the story in every way – adding atmosphere, nuance, and plenty of dynamism during the combat scenes. It was a little difficult to find good examples to use in the review, so I apologise for that. 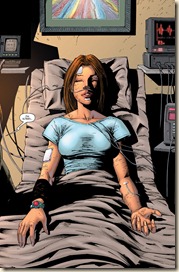 There’s a nice, slow build up to the story, as Marz unveils what’s really going on at a casual pace – this is a thriller, a mystery, a supernatural tale, with a dash of religious conspiracy all thrown into the mix. Sara, her partner Jake and the investigator, Patrick, are all on the case, trying to get to the bottom of what happened to Sara. There are good ‘cop dynamics’ between the group, which feels natural and believable (for someone whose only experience of such things is from novels and cop dramas on TV...).

The story has a bit of a abrupt ending, and it was maybe just a tad “easy” for Sara to solve the problem. The pacing would have worked better if you’d been reading it monthly, with the imposed waiting time between issues – taking that into account, as well as the fact that the main point of the story is to act as introduction (for new readers) and refresher (for established readers), I think it does a pretty great job. I’d already read the very first issue of Witchblade: Origins (the re-named pre-Witch Hunt storylines), but I think I could have easily followed this story even without it.

Witchblade is a really interesting series. I will have to get the second volume at some point, to see how Marz builds on the groundwork he lays in this book. Witch Hunt is a great jumping-on point, and it’s not hard to see why this is such a popular series. If you’ve not tried it, but like supernatural, horror and thriller comics, then I really recommend you do. If you like it, then there’s so much for you to catch up on, too!

I would also recommend The Darkness, the parallel series, which is also pretty good. There is a third series attached to these two, Artifacts, but I’ve not read any of it at this point. 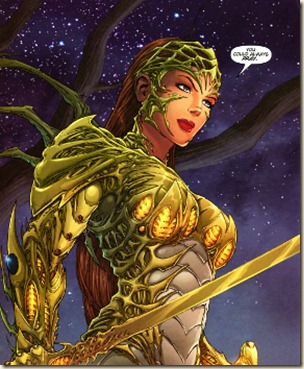