“For the Fallen” by Aaron Dembski-Bowden (Black Library) 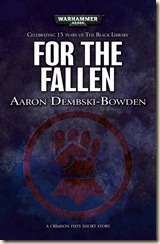 A historian visiting the ruins of Rynn’s World has an unexpected encounter with Crimson Fists Space Marines that will change the way he looks at history forever.

Seems to be connected to the story of Steve Parker’s Rynn’s World (part of Black Library’s Space Marine Battles series), as well as Aaron Dembski-Bowden’s own One Hate, a short-story that appeared in the Heroes of the Space Marines anthology.

For the Fallen is a pretty good glimpse into the WH40k setting, away from the battlefront. Unlike Abnett’s Kill Hill, this story looks at the emotional nobility of the Astartes, rather than their potential for savagery. The small contingent of Crimson Fists are on Rynn’s World to remember their fallen comrades, and we get a glimpse of one of their rituals of remembrance. It’s quite a touching, poignant scene. Dembski-Bowden gives the short story a reverential, sombre-yet-martial atmosphere. It’s a very short example of what Aaron’s best at: making these post-human, giant warriors feel human, more easy to relate to. It’s quite superb.

I’m not familiar with any other fiction featuring the Crimson Fists, so I may just have to give Rynn’s World and One Hate a try.

In the meantime, however, there’s going to be a fair bit more of Aaron D-B’s work featured on Civilian Reader: I’ve started Void Stalker, the last in his Night Lords trilogy, today; I will also listen to Butcher’s Nails at the gym this week, and soon after that read The Emperor’s Gift, all three of which I’ve managed through to acquire early. Given how much of I enjoy Aaron D-B’s work, I’m absolutely stoked to have more to read. (I also have Helsreach, Aaron’s Space Marine Battles novel to read at some point.)

Posted by Civilian Reader at 5:26 PM