I’m a bit late to the party, mentioning this on the site – there has been a lot of advance excitement surrounding the publication next month of Emily St. John Mandel’s Station Eleven. I haven’t read the novel (trying to track down a review copy), but I’ve heard from a couple of people who have and they sing its praises. One of those people is someone who is very difficult to please. The novel will be published on September 9th in the US (Knopf) and 10th in the UK (Picador). The two publishers have taken very different cover approaches, too: 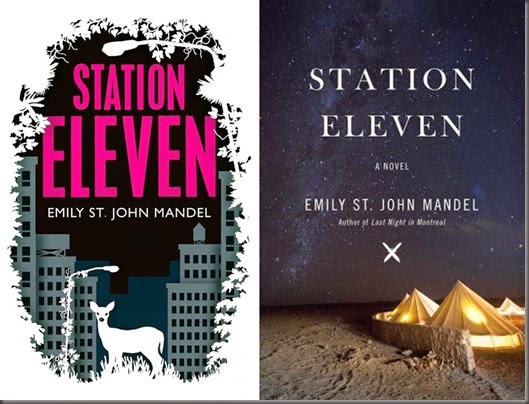 Which do you prefer? Personally, I like them both, but I may be leaning towards liking the UK cover just a little bit more. I like the overall composition, use of negative space, and the framing is all very nicely done. The US cover, also very nice, is a little more subtle, I think – it doesn’t speak as much to the premise as the Picador cover.

The Georgia Flu explodes over the surface of the earth like a neutron bomb.

News reports put the mortality rate at over 99%.

A band of actors and musicians called the Travelling Symphony move through their territories performing concerts and Shakespeare to the settlements that have grown up there. Twenty years after the pandemic, life feels relatively safe.

But now a new danger looms, and he threatens the hopeful world every survivor has tried to rebuild.

Moving backwards and forwards in time, from the glittering years just before the collapse to the strange and altered world that exists twenty years after, Station Eleven charts the unexpected twists of fate that connect six people: famous actor Arthur Leander; Jeevan – warned about the flu just in time; Arthur's first wife Miranda; Arthur’s oldest friend Clark; Kirsten, a young actress with the Travelling Symphony; and the mysterious and self-proclaimed ‘prophet’.

Thrilling, unique and deeply moving, this is a beautiful novel that asks questions about art and fame and about the relationships that sustain us through anything – even the end of the world

Posted by Civilian Reader at 3:45 PM