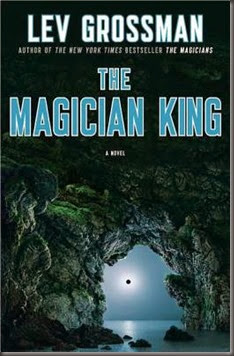 A superb follow-up to The Magicians

Quentin and his friends are now the kings and queens of Fillory, but the days and nights of royal luxury are starting to pall. After a morning hunt takes a sinister turn, Quentin and his old friend Julia charter a magical sailing ship and set out on an errand to the wild outer reaches of their kingdom.

Their pleasure cruise becomes an adventure when the two are unceremoniously dumped back into the last place Quentin ever wants to see: his parent’s house in Chesterton, Massachusetts. And only the black, twisted magic that Julia learned on the streets can save them.

In an effort to catch up for the third volume in Lev Grossman’s Magicians series, here’s my very quick review of The Magician King: it’s an excellent follow-up to a brilliant first installment. If you haven’t read this series yet, I strongly urge you do so. I don’t think you’ll be disappointed.

Now for a slightly longer bit…

The praise I had for the first novel is just as applicable here. It is a clever and engaging deconstruction of portal fantasy of the Narnia ilk. It’s a modernisation of that sub-genre, aimed at older readers. That’s not to say you have to be familiar with the work of C.S. Lewis to enjoy this novel – far from it, in my opinion – but familiarity with the adventures of the Pevensie siblings will add at least a couple of extra layers to your enjoyment of Grossman’s Magicians novels. 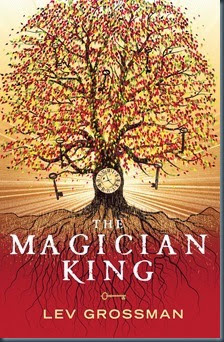 The most important development in The Magician King is Julia’s story: it is a great, grim juxtaposition to Quentin et al’s Brakebills education and their rather fantastical, fairy-tale experiences as kings and queens of Fillory. Julia’s is a tale more akin to that of a junky – after her rejection from Brakebills, and the ineffectual memory spell that was cast upon her, she experiences a psychological and physical decline from not taking care of herself, using sex to get what she wants (or, as she puts it, “the bathroom handjob”, which she “wielded with an iron fist”). Reading the story of Julia’s magical education is pretty intense and ultimately brutal. Very difficult revelation near the end, but one that sheds light on her character. It’s difficult to read this novel and not have Julia’s story overshadow Quentin’s – despite their shared storyline, and the fact that his experiences in this novel are actually interesting and important for the whole series. (Not to mention the ending, and what Quentin is subjected to, which was equally surprising.)

The story started a little more slowly than I would have liked, but built momentum nicely as the chapters went by. The characters remain interesting, sympathetic and nuanced. Grossman’s writing is well-composed and well-paced. The humour is well-deployed and understated. The magic is interesting and well-devised.

Overall, I thoroughly enjoyed The Magician Kings, and I’m very happy that I have a copy of The Magician’s Land ready to go, on the top of my TBR mountain. Expect that review soon.

Posted by Civilian Reader at 5:36 PM