An amusing, epistolary novel of academia, modern life and literature

Jason Fitger is a beleaguered professor of creative writing and literature at Payne University, a small and not very distinguished liberal arts college in the midwest. His department is facing draconian cuts and squalid quarters, while one floor above them the Economics Department is getting lavishly remodeled offices. His once-promising writing career is in the doldrums, as is his romantic life, in part as the result of his unwise use of his private affairs for his novels. His star (he thinks) student can’t catch a break with his brilliant (he thinks) work “Accountant in a Bordello”, based on Melville’s Bartleby. In short, his life is a tale of woe, and the vehicle this droll and inventive novel uses to tell that tale is a series of hilarious letters of recommendation that Fitger is endlessly called upon by his students and colleagues to produce, each one of which is a small masterpiece of high dudgeon, low spirits, and passive-aggressive strategies.

A very quick review, here. I’d heard about this novel a fair bit in the lead-up to publication, and as someone who has spent an awful lot of time at academic institutions, I was intrigued by the premise: a story told through a series of Letters of Recommendation. I was not disappointed. 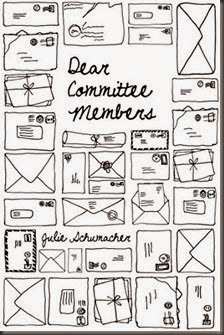 I read Dear Committee Members very quickly, blitzing through the chapters. Each one is excellent – the letters are curmudgeonly, acerbic, pleading, petty, and even moving at times (especially at the end). One letter contained quite the gut-punch, after a series of more-amusing, lighthearted letters. The protagonist is a difficult bastard, and doesn’t come across as the nicest or easiest person to know or work with. He’s belittling, but also observant. He skewers his colleagues, his exes, and also the modern trends of academia (from teaching to bureaucracy). Certainly, for the latter, I agreed with him almost wholeheartedly.

The novel is filled with great comments and quotable moments, but I won’t include any here – just do yourself a favour and go read the book.

I laughed a lot, reading this. I was also somewhat moved at times. If you’re looking for something a little different, something intelligent and funny, then I would strongly recommend Dear Committee Members.

Dear Committee Members is published by Doubleday in the US, and the Friday Project in the UK.

Posted by Civilian Reader at 3:58 PM