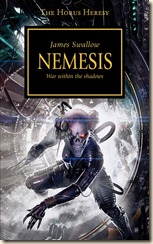 The Fight for the Galaxy enters the shadows…

After the horrors of Istvaan V, Horus declares outright war against the Imperium.

In the shadows of the Emperor’s Palace, powerful figures convene. Their plan is to send a team of assassins to execute the arch-traitor Horus and end the war for the galaxy of mankind before it's even begun. But what they cannot know is that another assassin is abroad already, with his sights firmly set on killing the Emperor.

Malcador the Sigillite (humanity’s number two, if you will), a character only hinted at or mentioned from a distance in past Horus Heresy literature, has issued a controversial order. The Imperium’s temples of assassins – each with their own styles, methodologies and internal politics – have been tasked to work together, for the first time ever, to bring down the ultimate target: the traitorous Warmaster Horus.

The novel is basically made up of three stories, all of which form a cohesive whole. The first follows the assassins’ Execution Force, as they plan and organise their team and how they will approach their task. The second thread has the feel of a great serial killer thriller, as local law enforcement tracks the evolving slaughter and plan of the ‘evil’ assassin. The third story, of course, is the overall backdrop of the Horus Heresy and the growing tensions generated across the galaxy by Horus’s betrayal – the uncertainties that arise among loyal and turncoats forces alike, the confusion felt by the local populaces of varied planets.

The Execution Force, drawing one operative from each assassin ‘clade’ (sect), is shipped off to a remote planet to lie in wait for their target. To delve too much into detail would spoil the novel, so suffice it to say that the characters drawn together – usually loners and misanthropic killers – develop a strained though respectful working relationship, as they draw on their individual strengths to bring down the most difficult mark they will ever face. The diversity of characters allows for a number of perspectives of the job, and as their plan unfolds the relationships between the assassins develop in surprising and humanising ways. The plan itself is not revealed until it’s executed, allowing for some decent build-up.

The other assassin mentioned in the synopsis above, is a real horror – a being twisted by Chaos and malice into a perfect killing machine, hell-bent on its one goal: killing the Emperor, the most powerful man in the universe. Using very different and sinister methods than the Imperial assassins, this monster cuts a swathe of carnage over the course of its mission.

Swallow’s writing is exceptional, and the novel’s plot is brilliantly crafted to draw the reader along. The pace of the story rattles along and I found myself easily devouring considerable chunks of it; I read this 500-page novel faster and with more enjoyment than many shorter novels.

The Horus Heresy series (which has sold over a million copies) is improving in leaps and bounds. After a slight dip in a couple of the novels that followed Ben Counter’s Galaxy in Flames (which formed the third in the series’ truly excellent opening trilogy), the novels have picked up again in great style. Each novel in the series adds a little more depth and colour to the mythology of the Warhammer 40,000 universe.

Nemesis is an excellent science fiction novel, with a gripping, engaging plot; three-dimensional and complex characters; a horrific antagonist; and brilliant writing. Is there anything else someone could want from a novel?

Very highly recommended, I really can’t wait for the next instalment to the series.

Posted by Civilian Reader at 11:28 PM