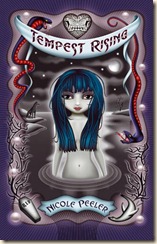 Living in small town Rockabill, Maine, Jane True always knew she didn’t quite fit in with so-called normal society. During her nightly, clandestine swim in the freezing winter ocean, a grisly find leads Jane to startling revelations about her heritage: she is only half-human.

Now, Jane must enter a world filled with supernatural creatures that are terrifying, beautiful and deadly – all of which perfectly describe her new ‘friend’ Ryu, a gorgeous and powerful vampire. It is a world where nothing can be taken for granted: a dog can heal with a lick; spirits bag your groceries; and whatever you do, never – ever – rub the genie’s lamp.

Thanks to the likes of Twilight and the Sookie Stackhouse (True Blood) novels, supernatural romance novels are big business. Nicole Peeler’s take on the genre – in her Jane True Series – has enough of a twist to keep readers interested, but didn’t blow me away at first read.

Small-town girl Jane True is totally normal, apart from a penchant for swimming in the winter ocean. Her life is lonely – an ailing father, and the girls who run the bookstore where she works are her main companions, and she is mostly ostracised by the rest of Rockabill, thanks to a tragedy in her past. Jane is a pretty sympathetic character, real and easy to like, although her ‘dirty drawer’ took me aback a little – it felt shoehorned in too early by the author as a way to keep those looking for something steamy in their supernatural romance reading until the obligatory hot vampire turned up.

Speaking of which, when Jane pulls a body out of a whirlpool on one of her night-time swims, it leads to a meeting with a gnome and a kelpie, and she discovers that not only is she not quite human, but there are plenty more supernatural residents of Rockabill. The town plays host to many others, including Anyan, a barghest; Ryu, a vampire sleuth; a succubus and some pretty tough goblins. I liked that Peeler’s characters weren’t the standard supernaturals, but were drawn from more obscure folklore – it lends her novel an edge that Twihards don’t usually possess. The novel follows Jane as she tries to learn more about her heritage, and as she and Ryu try to solve the mystery of the murders spreading through Rockabill’s supernatural community.

Ryu was a bit of a disappointment – I felt as though I only had the author’s word for it that he was a hot vampire, because his character doesn’t really develop over the course of the novel, as Jane’s does. I also found myself suspicious of his motives, which ended up being unjustified. Perhaps we will learn more of Ryu in the next instalment (Tracking The Tempest). Anyan, in contrast, is fascinating, perhaps because Peeler deliberately gives us so little of him. What we do learn, however, hints that he has been aware of Jane for far longer than she realises, and may yet play a greater role in her life.

I really enjoyed Peeler’s take on the Fairy Court – very original and full of vibrant detail. I also liked her creepy naga. As a heroine, Jane has exactly the right balance between uncertain human slowly learning about a new world and getting to grips with her own powers, and feisty female who won’t be cowed no matter whose world or what situation she finds herself in.

Peeler has a distinctive authorial voice, and her characters come across as real and contemporary. She clearly has a story to tell, and while I wasn’t always spellbound, I did want to keep reading. I look forward to the next book.

[Tracking the Tempest is published by Orbit in the UK, and is out now. The third book in the series, Tempest’s Legacy, will be published in December 2010 in the US, and January 2011 in the UK.]