With the paperback release of Abnett’s Blood Pact coming up in the not-to-distant future (October 2010), I thought I’d re-post my earlier review of the hardback, with just a couple of tweaks, in case you missed it the first time. Almost a year on from reading, I still think fondly of the book, which is certainly among not only the best in the series, but also one of my favourite sci-fi novels, ever. I can still remember most of it and how much I enjoyed reading it. Abnett is, without doubt, the Black Library’s best author – his writing is as good as, if not better than, most other science fiction published today, and I can’t recommend his work highly enough.

(A small warning: there are a couple of minor references to earlier volumes in the series, so if you’re afraid of spoilers, then you might not want to read this too carefully.) 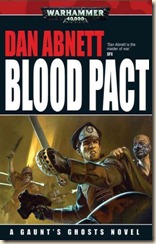 Far from the front, trouble comes for the resting Tanith First & Only

Pulled back from the front line, the men of the Tanith First await news of their next deployment. But when an enemy prisoner is brought in for interrogation, Gaunt is drawn into a murderous web of intrigue.

Who can be trusted, and what exactly does the prisoner know that makes him so valuable? The fate of the Sabbat Worlds Crusade rests upon the answers, and Gaunt must find them out before he is eliminated.

Kicking their heels on Balhaut, far from the warfront, the Tanith First & Only are awaiting their next deployment. After the bloody events of Only In Death, Colonel-Commissar Ibram Gaunt is recovering well, and getting used to his new augmetics. While he finds himself slipping with ease into the calmer life far removed from the battlefront, the same cannot be said for his men: experts at the conduct of war, unequalled in their given specialty (infiltration, scouting, and being generally sneaky), it turns out they don’t do well as a garrison force. As Commissars Hark and Ludd (Gaunt’s junior officers) discover, the more time spent with nothing-in-particular to do only makes restless Guardsmen go crazy, pushing the envelope and boundaries of what is allowed and acceptable behaviour from Imperial forces.

All is going moderately well until Gaunt is called in by Section (the HQ of the Commissariat on Balhaut) to take part in the interrogation of a high-level prisoner. As events escalate to violence, Gaunt must navigate through the web of intrigue (on both sides of the conflict) to discover what is so valuable about the prisoner’s knowledge. Without knowing who can be trusted, he has to rely on his wits and a small core of the Ghosts to survive and get to the bottom of things. The legacy of the Gereon campaign (the subject of Traitor General and The Armour of Contempt) makes him distrusted by his superiors, and the Inquisition is sniffing about the Ghosts, looking for anything damning. Gaunt just needs to stay alive, keep his prisoner from being killed, and discover the truth that, supposedly, could help decide the fate of the Crusade. As Gaunt hunkers down, the various factions looking for him and his companions draw nearer, culminating in an explosive, gripping and bloody finale.

Each new Gaunt’s Ghosts novel is an event for me. Each time Abnett turns his attention back to Gaunt and company, he goes some way to reimagining the science-fiction war novel. He has been referred to as the “master of war”, which is certainly accurate: no other author can bring you into the mindset of the grunts on the ground, while retaining a keen eye on characterization, character development, and superb story-telling. Whenever there is a switch in perspectives, you really get a sense of the person’s character and voice; and Abnett manages to keep things fresh and exciting each and every time (the only novel of his that I couldn’t really get into was Double Eagle, a stand-alone).

For Blood Pact, things are a little different in terms of style. For one, it’s is a slower novel – the action only really starts quite a way into the book. The novel has a more thriller-like feel to it, as the story is slowly unravelled for the reader. From the very beginning, I was hooked (it can sometimes take a couple of chapters for me to become truly taken with Black Library releases), and the plotting is expertly crafted for maximum effect and reading addiction. There’s a fair amount going on in every chapter – and, if it’s been a long time since you’ve read any of the previous Ghosts novels, it might take a moment to remember who all the characters are – but the pace is balanced and there is never a lull in the story.

The second big departure is the more nuanced approach to the Imperials and Chaos/Archenemy forces. The Blood Pact soldiers of the title aren’t portrayed as mindless minions – rather they are presented in a more three-dimensional manner, as Abnett gives us a deeper glimpse into their mindset. Eyl, in particular, is a clinical, sociopathic adversary for Gaunt, frighteningly focused, with the perspective of a true believer. That the Imperials have taken an agent of Chaos prisoner, rather than execute him on the spot is also a new take on the galactic crusade that forms the backdrop of the whole series (not to mention the complete Warhammer 40k oeuvre), and allows the author to take a look at the Imperium’s approach to non-combat warfare. Indeed, the author’s approach to the whole Warhammer 40k universe feels very different from other authors who take up the task of writing about it – things are more nuanced as a whole, deeper, and often far more intelligent and original, relying more on his own imagination than the information and background laid out by the army books. I wouldn’t be surprised, actually, if Abnett’s novels have gone a long way in redefining the universe he writes about.

Abnett’s sense of humour comes through well, without coming across as forced, out of place, or over-done – it is almost Pratchett-esque, in fact, made up as it is of amusing asides and sarcastic remarks, slightly impish in nature; the interactions between different troopers and members of the regiment, as well as Ayanti Zweil and Dr Kolding adds further colour to the novel. Considering it’s set in a fictional, dark and brutal future, it all feels very realistic, and Abnett’s skill at writing sympathetic characters will make you care about each and every one of the Ghosts.

It’s difficult to go into much more detail about the novel without ruining the story, so I won’t go into the plot any more. Needless to say, Abnett has written another winner – perhaps the best so far – and any fan of his writing should snap this up ASAP. His writing is broad in scope, with a keen eye for human nature and the effects war can have on the individual – not to mention the effects of social re-entry away from the battlefield.

Blood Pact should definitely appeal to readers of the Black Library’s wider catalogue, but also to fans of science fiction as a whole. Abnett’s noir-tinged war tales are exciting, engaging, and far more enjoyable than anything else in this genre. I also can’t help thinking that this is how good the writers of Battlestar Galactica wish their show had been (I was not a fan of that series).

For those interested in the Sabbat Worlds setting, I just want to draw your attention to another Black Library release: the Sabbat Worlds Anthology, also released in October 2010, features a new Gaunt’s Ghosts short story, alongside other contributions from the Black Library’s stable of established and up-and-coming  authors. Here’s the cover art and the blurb from BL’s website: 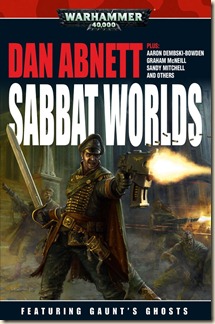 Across the Sabbat Worlds, a bitter conflict is fought, a conflict that can only end in victory or annihilation. The innumerable forces of the Arch enemy attack without mercy, and planet after planet burns with the flames of war. Yet even amidst this nightmare, the Imperial Guard stand stoic against their foes. The Phantine Air Corps battle the enemies of mankind across burning skies, while the Gereon resistance tries to break the foothold of Chaos on their beleaguered world and the legendary Gaunt’s Ghosts fight in the most violent and bloody of warzones.

This anthology opens the gateway to the Sabbat Worlds like never before, featuring new stories from some of the Black Library’s best-known authors including Dan Abnett, Graham McNeill, Aaron Dembski-Bowden and many more.

I’m currently reading the Fear the Alien anthology between novels (review should go live perhaps by the end of next week), but as soon as I’m done with that, I’ll get started on this collection. It’ll be interesting to see how other authors work with Abnett’s setting, and of course the new Gaunt’s Ghosts story is a real draw.

Posted by Civilian Reader at 3:34 PM