Another post to highlight some highly anticipated, upcoming reviews for the site. I’ll let the synopses do the talking, and have scribbled some initial thoughts after each. There are a couple here that will be reviewed immediately (see, once again my carefully considered plans have been thrown out the window…), with the others also edging higher up the schedule: 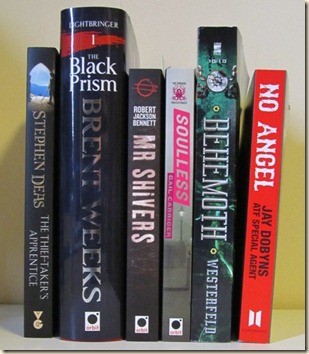 2010 is really shaping up to be an excellent year for books. 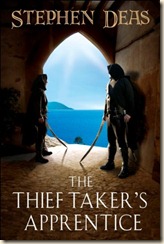 The beginning of a new fantasy trilogy

Berren has lived in the city all his life. He has made his way as a thief, paying a little of what he earns to the Fagin like master of their band. But there is a twist to this tale of a thief.

One day Berren goes to watch an execution of three thieves. He watches as the thief-taker takes his reward and decides to try and steal the prize. He fails. The young thief is taken. But the thief-taker spots something in Berren. And the boy reminds him of someone as well. Berren becomes his apprentice… And is introduced to a world of shadows, deceit and corruption behind the streets he thought he knew.

Full of richly observed life in a teeming fantasy city, a hectic progression of fights, flights and fancies and charting the fall of a boy into the dark world of political plotting and murder this marks the beginning of a new fantasy series for all lovers of fantasy - from fans of Kristin Cashore to Brent Weeks.

This will be my first novel by the author, and I’m quite looking forward to it. The premise sounds interesting and somewhere in the same genre/vein as Brent Weeks’s Night Angel Trilogy, which I loved. I have the author’s first novel, The Adamantine Palace, yet I’ve never found the time to dive into it – on my shelf-of-books-yet-unread, it’s situated next to Patrick Rothfuss’s In The Name of the Wind, Sam Sykes’s Tome of the Undergates, MD Lachlan’s Wolfsangel, and Joe Abercrombie’s First Law Trilogy (all series/books I feel bad for not having starting or read yet). I’ll be reviewing this book next, so expect a review within a week.

I should also point out that Mr Deas himself actually sent this to me (signed), so a huge thank you for that! 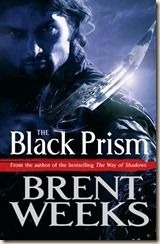 The highly anticipated start to a new series

But Prisms never last, and Guile knows exactly how long he has left to live: Five years to achieve five impossible goals.

To say I’ve been looking forward to this would be a big understatement. The Night Angel Trilogy was brilliant, and I devoured each volume as soon as I could get my hands on them. I selected the whole trilogy as my best read of 2008. I told everyone about it. I even bought the trilogy for a friend.

So, there’s a lot of anticipation for The Black Prism. I’m anxious that it might not meet my ludicrously high expectations, but I can’t wait to start it. I’ll review this immediately after Thief-Taker’s Apprentice, so hopefully by the end of next week (or there about). Fingers crossed… 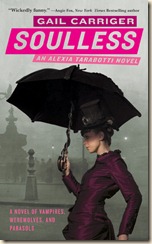 Alexia Tarabotti is labouring under a great many social tribulations. First, she has no soul. Second, she’s a spinster whose father is both Italian and dead. Third, she was rudely attacked by a vampire, breaking all standards of social etiquette.

Where to go from there? From bad to worse apparently, for Alexia accidentally kills the vampire — and then the appalling Lord Maccon (loud, messy, gorgeous, and werewolf) is sent by Queen Victoria to investigate. With unexpected vampires appearing and expected vampires disappearing, everyone seems to believe Alexia responsible.

Can she figure out what is actually happening to London’s high society? Will her soulless ability to negate supernatural powers prove useful or just plain embarrassing? Finally, who is the real enemy, and do they have treacle tart?

Soulless is a comedy of manners set in Victorian London: full of werewolves, vampires, dirigibles, and tea-drinking.

Alyssa’s already reading this one, so the review should be forthcoming. She seems to be enjoying it a great deal, and initial feedback is that it’s funny, original, but a tad predictable in the love-interest aspect of the novel.

I think I’ll probably pinch it back after she’s finished with it, so I can give it a try – the premise of this novel sounds pretty quirky and interesting, as do the second and third in the series. 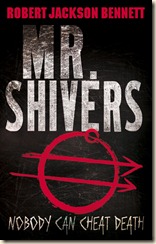 It is the time of the Great Depression. Thousands have left their homes looking for a better life, a new life. But Marcus Connelly is not one of them. He searches for one thing, and one thing only: Revenge.

Because out there, riding the rails, stalking the camps, is the scarred vagrant who murdered Connelly’s daughter.

One man must face a dark truth and answer the question – how much is he willing to sacrifice for his satisfaction?

I’m not entirely sure what genre this book falls into, but I’ve read one review of it, a while back, which made it sounds really interesting and original. I’m interested in reading something set in this time period, too, as it’s not one I’ve come across too often.

Expect it to be reviewed relatively soon, but probably not in time for its publication date. 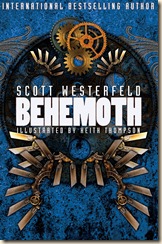 Steampunk sequel to the critically-acclaimed Leviathan

Deryn is a girl posing as a boy in the British Air Service, and Alek is the heir to an empire posing as a commoner. Finally together aboard the airship Leviathan, they hope to bring the war to a halt. But when disaster strikes the Leviathan's peacekeeping mission, they find themselves alone and hunted in enemy territory.

Alek and Deryn will need great skill, new allies, and brave hearts to face what's ahead.

I’ve not read Leviathan, but both of my review-minions Emma and Alyssa have, and they both loved it. The lovely peeps at Simon & Schuster sent through an ARC for Behemoth, and Alyssa’s nabbed it already for a review (she has really quick hands…). My general consumption of steampunk is actually, thusfar, nil – somehow, I’ve managed to not read a single novel in the genre, despite its growing popularity. I have recently purchased the eBook of Cherie Priest’s Boneshaker, though, and I’ll be trying to get reviewed soon (ah, plans grown from the best of intentions…).

Having flicked through the Behemoth ARC, I’m intrigued by the premise and also the world Westerfeld has come up with (steampunk alternative history). The internal illustrations (by Keith Thompson) are also great, but I’m not sure how that would effect my reading of the novel: it might feel a little bit like being told how to imagine the story and the world… Anyway, everyone I know who’s read the first in the series, as I mentioned, has loved it, so I’m going to try to give it a read as well at some point. Maybe after I finish my PhD.

And on the non-fiction side of things… 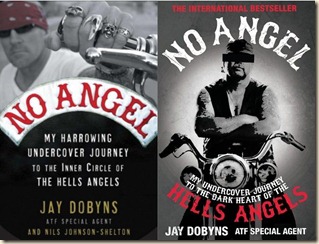 An ATF agent goes undercover with the Hell’s Angels

The first federal agent to infiltrate the inner circle of the outlaw Hells Angels Motorcycle Club, and the inside story of the 21-month operation that almost cost him his family, his sanity, and his life.

Getting shot in the chest as a rookie agent, bartering for machine guns, throttling down the highway at 100 mph, and responding to a full-scale, bloody riot between the Hells Angels and their rivals, the Mongols – these are just a few of the high-adrenaline experiences Dobyns recounts in this action-packed true story.

Dobyns leaves no stone of his harrowing journey unturned. At runs and clubhouses, between rides and riots, Dobyns befriends bad-ass bikers, meth-fueled “old ladies”, gun fetishists, psycho-killer ex-cons, and even some of the “Filthy Few” – the elite of the Hells Angels who’ve committed extreme violence on behalf of their club. Eventually, at parties staged behind heavily armed security, he meets legendary club members such as Chuck Zito, Johnny Angel, and the godfather of all bikers, Ralph “Sonny” Barger. To blend in with them, he gets full-arm ink; to win their respect, he vows to prove himself a stone-cold killer.

Hardest of all is leading a double life, which has him torn between his devotion to his wife and children, and his pledge to become the first federal agent ever to be “fully patched” into the Angels’ near-impregnable ranks. His act is so convincing that he comes within a hairsbreadth of losing himself. Eventually, he realizes that just as he’s been infiltrating the Hells Angels, they’ve been infiltrating him. And just as they’re not all bad, he’s not all good.

This has been described as the new Donnie Brasco and the most in-depth account of the world of Bikers since Hunter Thompson’s seminal work, Hell’s Angels (which I might also review one day). As this isn’t fiction, it’ll actually be reviewed on the other (sadly less active) site, but I thought I’d include it in this list – I consider it among my reading-for-pleasure books, and one that might hold wider interest for general readers.

I’ve been watching Sons of Anarchy, which is utterly brilliant and has put me in the mood to learn/read/watch more about bikers and their culture, so I ordered this book on the strength of a Newsweek excerpt I remember reading a couple years ago, when the hardback edition was released in the US.

The TV show has really got under my skin, and all I want to do at the moment is buy a motorbike, put on my leather jacket and shades, and cruise along a sun-drenched US highway… (I’m a PhD student – if we’re not working, we’re fantasising about things that are far more interesting and exciting than our research…)

So, that’s the latest taste of things to come on the website. Hope you come back to check out the reviews when they’re up.