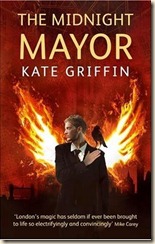 A grittier, darker Neverwhere, and a sequel that is better than the original

It’s said that if the ravens ever leave the Tower of London, then the Tower will crumble and the kingdom will fall. As it happens, that’s not so far from the truth...

One by one, the magical wards that guard the city are failing: the London Wall defiled with cryptic graffiti, the ravens found dead at the Tower, the London Stone destroyed. This is not good news. This array of supernatural defences – a mix of international tourist attractions and forgotten urban legends – formed a formidable magical shield. Protection for the City of London against... well, that’s the question, isn’t it? What could be so dangerous as to threaten an entire city?

Against his better judgement, resurrected sorcerer Matthew Swift is about to find out. And if he’s lucky, he might just live long enough to do something about it...

My main problem with The Madness of Angels, the first in this series, was the constant switching between the perspectives of Matthew Swift the wizard and the blue electric angels. The Midnight Mayor is more plot-driven, and Griffin seems more comfortable with her version of London: having set up her mythology, she is now free to play around within it.

The urban magic that her fantasy world runs on is inventive and logical, weaving together fact and fiction with her considerable imagination to create a novel that is both memorable and original. The characters develop throughout The Midnight Mayor; even though Griffin kills a lot of her characters off, I liked the development of Oda from fanatic to a little more human, and Matthew is easier to understand. The denizens of the city that he meets are also compelling: from the Maid, the Mother and the Hag; to the great dragon, the Aldermen and the mysterious Mr Pinner.

It’s difficult to go into too much more detail, as to do so would ruin many of the interesting and surprising twists. Griffin’s overall story is strong, but she is also good at the little details, such as the fox that Swift talks to in order to discover more about the death of the pervious Midnight Mayor, and also the way that you come to see how seemingly-insignificant things add up as the novel progresses.

Posted by Civilian Reader at 1:07 PM