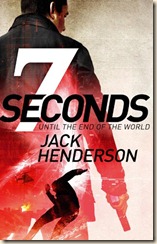 The new top-voice in techno-thrillers? The jury’s still out…

In early 2003, an ousted UN weapons inspector is assassinated on the eve of a bombshell press conference. Rumours surface that this man had been passed damning evidence of a worldwide cabal of unimaginable power and wealth, and of their endgame that the coming war was meant to set in motion.

It was the stuff of the wildest conspiracy theories: a global elite engineering the crash of financial markets, the soaring prices of food and energy, the numbing of the general population through a manufactured climate of fear. With the murdered man discredited and his evidence destroyed, all of it would soon be forgotten.

But two intertwined parts of a coded text survived the assassination. One half is in the hands of a young female operative, already on the run from her own dark past. The other is delivered to the only man alive capable of unlocking its promise: a long-suppressed technology that could either usher in a new age of peace for all mankind, or become the ultimate weapon of mass destruction.

I really wanted to like this novel, but unfortunately there were a couple of things that prevented me from really engaging with it. First of all, the prologue and initial chapters read rather strangely; they were a bit jumbled and seemed to hop about, even though the story didn’t really. The scene in the dingy motel, when we’re supposed to be getting to know Jeannie was just odd, and somewhat unbelievable. It therefore took me a lot longer than for any other thriller for a long time to get into. For too long, it felt like I was arriving late to a party and not entirely sure what was going on – I was completely unaware that this was a follow-on from Maximum Impact, for example, for some time.

The assassination in Chapter 2 is a little over-explained; while perhaps necessary, it comes across a little too perfectly-executed, not to mention like magic – as all advanced, unknown science/technology can to the masses. Sadly, rather than being filled with wonder, I merely raised an eyebrow. A lot of the science and technology mentioned or used in the novel is pretty interesting (I have no idea if some of it actually exists), and usually incorporated well – except in the above-mentioned instance, which I found a little too unrealistic.

One strength of 7 Seconds is that Henderson has drawn extensively on current affairs and contemporary events to create his plot and the events that unfold within the novel – for example, the polonium poisoning; the war in Iraq; the everlasting, unshakeable fear of and belief in corporate conspiracies; the money-go-round in Washington; corporate assassins; and so forth. While this made the novel feel extremely current and relevant, he perhaps over-did it a little – not strictly a bad thing, I just think the plot would have benefited from better targeting, as it were.

This is probably a good time to mention Henderson’s approach to details, which isn’t quite what I was hoping for. On a micro-level (i.e. what characters do at specific times and places), Henderson frequently goes overboard – basically, we know everything that they are doing; while on the macro-level (i.e., what’s going on with the general plot and characters), he's not so clear. By page 70, I was still trying to figure out what was going on, with only the help of the synopsis on the back of the book, and not at all connecting with any of the protagonists.

Speaking of the characters, they all felt somewhat cold to me. Sure, for some this was meant to be the case, but for others they didn’t feel real. Jeannie’s former assistant comes across as just an out-of-his-depth frat boy, his dialogue frequently contrived or just lacking the realism one might expect from someone who is meant to be a Director of Special Projects at DARPA. The characters are all meant to be three-dimensional, often damaged in their own ways, but where Henderson seems to be trying to throw down lines to keep us guessing and reading to find out more, I was just getting frustrated by not knowing really what was going on. The dialogue, while sometimes witty, was predominantly realistic and natural, with only a few instances where it veered off into stilted, boring and unrealistic territory.

Where Henderson is good at characterisation, it’s when he’s portraying the more sociopathic people that populate the novel: April Medici, for example, is cold, calculating and dismissive of those ‘lower’ than her, and has a single-minded, Machiavellian view of the world. While Medici is an interesting character, however, she remains a tad cliché – you’ve probably seen her twin in at least one James Bond movie.

(As a total aside, I find it a little ironic that the novel’s title suggests a breakneck race to save the world, but the novel is almost 500 pages… Not a criticism, it just appealed to my sense of irony.)

So, overall, Henderson’s premise is a good one, certainly tapping into contemporary fears, conspiracies and issues (if, as already mentioned, a little too much for one novel). The novel’s pacing is not great, however, and I personally think he needs to get the attention to detail balanced properly – a little more macro, tone down the micro-level detail of everything technical his characters do. I do think, though, that with time Henderson will develop into a great thriller writer, and he is one to watch out for. Maybe an extra round of draft-and-rewrite was called for, in order to tighten up the plot and improve the characters.

A rather cautious recommendation for anyone who likes their thrillers highly-detailed and definitely contemporary. I admit to being disappointed, and I don’t like posting negative reviews (I always wanted this blog to recommend good books, not tell readers of books to avoid), but it should be made clear that there are still elements of the novel to recommend it to die-hard techno-thriller fans, and it should keep them satisfied until Clancy releases his next novel sometime later this year (apparently).

Posted by Civilian Reader at 2:52 PM