I’m indebted to Speculative Horizons and A Dribble of Ink for posting this originally, but as a huge fan of Scott Lynch’s Locke Lamora series, I had to post it myself, too – if for no other reason than the artwork is gorgeous and should be shown to the world (or, at the very least, the tiny slice of it who visit this website…). What am I talking about? The new UK artwork for the third in Lynch’s Gentlemen Bastard series, The Republic of Thieves: 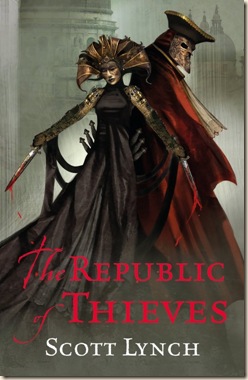 I must say, I absolutely love it. The style is new and different from that which graces the covers of The Lies of Locke Lamora and Red Seas Under Red Skies (below), which I also liked very much. 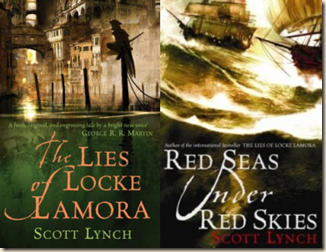 For those of you who have read the first two novels and are interested in the synopsis for The Republic of Thieves, keep reading:

After their adventures on the high seas, Locke and Jean are brought back to earth with a thump. Jean is mourning the loss of his lover and Locke must live with the fallout of crossing the all-powerful magical assassins the Bonds Magi. It is a fall-out that will pit both men against Locke’s own long lost love.

Sabetha is Locke’s childhood sweetheart, the love of Locke's life and now it is time for them to meet again. Employed on different sides of a vicious dispute between factions of the Bonds Sabetha has just one goal – to destroy Locke for ever.

This novel can’t come soon enough. I’ve missed the shenanigans of Locke and Jean, and this will be read the moment I can get my hands on it. If you haven’t had the pleasure of reading any of Lynch’s novels, I strongly recommend you pick up The Lies of Locke Lamora and let yourself sink into the world and the characters’ adventures. You won’t regret it.