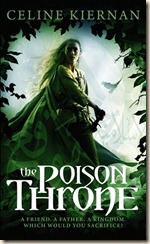 The first instalment of the exciting new Moorehawke Trilogy

Young Wynter Moorehawke returns to court with her dying father. But her old home is cloaked in fear.

The once benevolent King Jonathon is now a violent despot, terrorising his people while his son Alberon plots a coup from exile. Then darkness spreads as the King appoints Alberon’s half-brother Razi as heir. Wynter must watch her friend obey his father’s untenable commands, as those they love are held to ransom.

And at the heart of matters lies a war machine so lethal that none dare speak of it. The kingdom would belong to its master, yet the consequences of using it are too dire to consider. But temptation has ever been the enemy of reason.

The narrative of The Poison Throne unfolds through the perspective of Wynter, a character who embodies many contradictions within her world. She is a woman and also a high-ranking apprentice to her father, a carpenter, and a commoner practicing a trade, with a title and a position in court. Most importantly, because she is returning to the court after a five-year absence, Wynter is at once a knowing insider, skilled in the arts and manoeuvres necessary for survival there, and a newcomer completely unprepared for the world in which she finds herself. Kiernan uses this aspect of Wynter’s perspective to great effect, developing the image of the kingdom as it once was through Wynter’s memories, even as she reveals the extent to which it has changed.

The atmosphere and pacing of the novel are both excellent. At first, the action unfolds slowly, as the strained and threatening mood of the court is revealed to both Wynter and the reader, but the pace quickly picks up, and it seems that every few pages, something is introduced to alter the stakes for the characters. This quick pacing adds to the atmosphere of the novel, creating a world in which everything is precarious. Each new event changes things dramatically for the characters, putting them in a constant state of instability, in which they are, as Wynter’s father Lorcan observes, constantly reacting rather than acting of their own accord:

“React, react, react. No time to plan, no time to organise any kind of defence, before the earth shifts, and the tides turn, and we’re on the move again.”

Kiernan’s characters are well-drawn, and their interactions complex. For me, one of the most compelling relationships in the novel is the one between Lorcan and Jonathon, which at once allows Jonathon the depth of character that prevents him from being merely a one-dimensional villain, and reveals a shared history that is crucial to the political situation at hand. Kiernan’s greatest strength is the extent to which she allows the essentially political action of her novel to play out through the relationships and actions of her characters. Because of the close relationships Wynter and her father have with King Jonathon and his family, each and every political act in the novel has, for them, a personal resonance, and each piece of information arrives charged with emotional as well as political significance.

Early in my reading of The Poison Throne, I had a few reservations. I found myself somewhat baffled by Wynter’s reactions to other characters; specifically, her initial distrust of Christopher, with very little real cause, and her intense devotion to Razi, who she has not seen or heard from for five years. However, as I read on, and the nature of the world of the court and Wynter’s history with Razi was revealed, these concerns faded away.

There are a few kinks in the writing that need to be ironed out (for example, a tendency to over-use specific adjectives when introducing new characters: “tomcat” for Christopher and “shock-haired” for Jerome occur all too often when these characters first appear).

Overall, however, this is a great read, and I look forward to the rest of the trilogy.

Posted by Civilian Reader at 5:34 PM