“A Madness of Angels”, by Kate Griffin (Orbit) 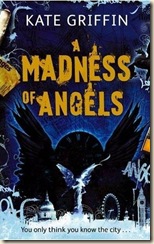 There’s much more in London than life – there is power. It ebbs and flows with the rhythms of the city and hums with the rattle of trains and buses. It waxes and wanes with the patterns of the business day. It is a new kind of magic: it is urban magic.

Enter a London where magicians ride the Last Train, seek favours from the Beggar King and interpret the insane wisdom of the Bag Lady. Beings of power soar with the pigeons, scrabble with the rats, and seek insight in the half-whispered madness of the blue electric angels…

A Madness of Angels is part fantasy, part thriller with a twist. Sorcerer Matthew Swift is an intriguing character and the novel rattles along at a roaring pace as he tries to uncover the dark side of this London. This is an exceptional debut novel. Griffin writes with a tremendous sense of atmosphere, bringing the sights, sounds and smells of Swift’s London to life. Her imagery is vivid and unusual, especially when describing a pigeon-eye view, or one of the magical constructs of this city: a monster formed from rubbish – chip papers, gum and broken glass. Famous London landmarks appear, but are distorted or made unfamiliar, seen through Griffin’s eyes, reimagining the familiar in weird and wonderful ways.

Unlike in so many fantasy novels, the world she creates is gritty and realistic: our world, but distorted through a lens of urban magic. Her dialogue is well-crafted, often witty, but never gives too much away as she slowly weaves the tale together.

The voices of the blue electric angels, speaking through Swift, work well most of the time. However, if I do have one criticism of this otherwise excellent novel, it would be that this device sometimes becomes confusing – for example, the frequent switching between “I” and “we” within the same sentence.

Overall, though, Griffin’s fantasy world is unusual and distinctive, her authorial voice assured, her plot fast-paced and full of unexpected twists and turns. A Madness of Angels is a gripping and sometimes disturbing read that keeps the reader guessing until the very end. Highly recommended.

Posted by Civilian Reader at 6:51 PM