“The Executor”, by Jesse Kellerman (Sphere) 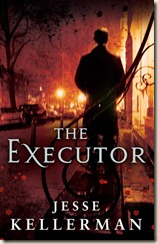 The latest psychological thriller from a new master of the genre.

Things aren’t going well for Joseph Geist. He’s broke. His graduate school advisor won’t talk to him. And his girlfriend has kicked him out of her apartment, leaving him homeless and alone.

It’s a tough spot for a philosopher to be in, and he’s ready to give up all hope of happiness when an ad in the local paper catches his eye.

Which sounds perfect to Joseph. After all, he’s never done anything in his life except talk. And the woman behind the ad turns out to be the perfect employer: brilliant, generous, and willing to pay him for making conversation. Before long, Joseph has moved in with her, and has begun to feel very comfortable in her big, beautiful house.

So comfortable, in fact, that he would do anything to stay there—forever.

I first discovered Jesse Kellerman’s writing last year, when I read and reviewed The Brutal Art, a slow-burning noir-ish thriller set in New York City. When The Executor arrived, I was eager to get to it. As a (seemingly perpetual) postgraduate student myself, I could relate pretty quickly to the protagonist of the novel, Joseph Geist. Geist has over-run on his postgraduate studies, suffers from writers’ block, has a tyrannical supervisor (one difference between us – mine’s great), and he finds himself withdrawn from the academic community he is meant to be working within:

“It is proof of the extent of my alienation from colleagues and tutors that I avoided the place unless absolutely necessary, preferring to sequester myself in an abandoned corner of the sixth floor of Widener, where I sulked and pretended to write.”

Given the main character is a philosophy student, it is unsurprising that his research topic features prominently in the story – thankfully, Kellerman is mostly able to avoid the more dense academic jargon, but when he can’t he manages to incorporate it well enough into the story that it won’t detract if you don’t understand. That being said, I would say I even managed to learn a little something from the scenes of conversation between Alma and Joseph.

There’s a dry and often dark wit on display through the first three-quarters of the novel, and when this is coupled with Kellerman’s sparse prose and tight plotting, it makes for an exceptionally enjoyable reading experience.

“These days it's hard to be too suspicious, paranoia no longer a pathology but a mark of savvy.”

Considering that there are plenty of unsavoury topics discussed in the novel (from child abuse to body disposal), Kellerman manages to keep it engaging and interesting, not to mention enjoyable, throughout. The style is very much that of a first-person conversation with Joseph – except for a short section that switches into the second person. The pacing is interesting – despite the high level of dialogue and the generous print-spacing, the pace was more languid – very much like the conversations Joseph must have had with Alma, and I felt myself not getting through it as quickly as I thought, even though I didn’t feel like I was battling to get through it at all.

Joseph is a complex character: a product of an unhealthy family life, and yet still quite narcissistic. You get a sense of his genuine affection and protectiveness for Alma (dithering over where is best to leave her tray of food when she’s unwell, lest she be unable to reach it, or stumble over it), and certainly when it comes to Eric, her nephew. Even if it is predicated on her largesse and generosity, we feel it is still heartfelt. Later in the novel, a number of psychoses emerge, acute paranoia and a general preference for thinking the worse of people’s motivations. In himself, I can imagine many English Literature students would find plenty to write and study about Joseph, in terms of motivations, greed, dependency and so forth. He’s one of the most intricately-drawn characters I’ve read in a while – without the hint of a whiff of cliché about him. Greed cannot be disconnected from his eventual actions and state-of-mind:

“I had come to take for granted that I should have food and shelter and books and beautiful objects; I had come to possess these things in my mind, so that they were not luxuries to be wary of but necessities to plan around.”

Eric is an obnoxious character (interestingly, I dislike him for exactly the same reasons as Joseph does), and one who so obviously abuses his aunt’s generosity and sense of responsibility. In particular, during the conversation he has with Joseph at the Irish Pub over lunch, his true scheming  and selfish nature come fully realised. Predatory, somewhat sociopathic and opportunistic, he is an interesting (if not entirely opposite) foil for Joseph.

Alma is a great character. She has a cheeky wit, and you get a real sense of the sparkle that still infuses her (when she’s well). This makes her the perfect old lady, and exceptionally endearing – I almost wish my own grandmother was like her.

Kellerman’s writing is very good at making you care for characters. The events of pages 251-2, for example, almost brought a tear to my eye (not going to spoil it, you’ll just have to read the novel); this is something a book hasn’t done for many years, and something only three episodes of West Wing seem capable of. Perhaps I’m dead inside… Kellerman’s ability to make you care for his characters is his genius.

Joseph’s eventual predicament is interesting, his final state of peace not what one might expect. It follows a truly bizarre, fevered section that was uncomfortable to read, but as always with Kellerman, expertly written to create an atmosphere of disconnected confusion and paranoia, brilliantly rendering Joseph’s fractured state of mind, torturing himself and, in a way, those around him.

This is a superb novel, and Kellerman continues to grow and improve with each new release. After reading just two of his novels, Kellerman has become one of my favourite authors.

The Executor comes very highly recommended, and Kellerman is an exceptional talent.

Posted by Civilian Reader at 10:12 PM