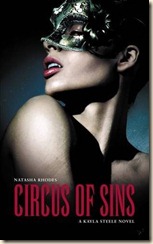 Vampires, Werewolves, and the end of the World… A recipe for excellence?

When young Vampire-Hunter Kayla Steele is bitten by a werewolf, she thinks it’s the end of her world. However, little does she know that the real end of the world is not that far away. Master Vampire Harlequin has made a deal with the Devil and is now planning to commit the ultimate sin – killing an angel – which will trigger an ancient curse and bring about war in heaven.

If that happens, it will be the end of mankind forever.

Kayla’s only hope now lies in a mysterious stranger named Niki, who knows where the angel is being kept. Together, they must rescue the angel before midnight on Sunday in order to stave off Armageddon. But unless Niki is who he claims to be, the stakes just got one hell of a lot higher…

Circus of Sin is based on an excellent premise, and reading about the book I was very interested in getting into it. Sadly, however, it proved a lot more difficult than expected.

It took me quite some time to warm up to the heroin, or sink into the story – thankfully, Rhodes offers some condensed exposition and catch-up for new readers. But, considering this takes place a mere three weeks after the second book in the series, The Last Angel, it was almost inevitable that it might take a while to get into it; I felt a little like someone who had arrived late to the party, and definitely that I’d missed out by not reading the first two books in the series.

There are other issues, however. Namely, that the novel unfortunately comes across as over-written at times, and sometimes repetitive in redundant and annoying ways, as the author resorts to tautologies: for example, making a point of describing Harlequin as the master vampire twice within two pages, as if we might have forgotten who he was (and that he’s prominently mentioned in the back-cover synopsis...). At another point, she uses three (not great) analogies, in a row, to explain who the Seekers/Avenging Angels. Sadly, none of the analogies feel fully formed, and this might explain why three were attempted. One of them is:

“In case you don’t know what they do, imagine humanity as a screaming two-year-old having a tantrum and God as the Father. Avenging Angels are God’s belt, a tool he uses to dispense justice to the world.”

There are moments in the novel where I was thrown a little – not always a bad thing, as it sometimes made me chuckle – as Rhodes threw the plot or a specific situation in a direction I had not been expecting. For an amusing example, take she identifies some werewolves: Harlem, Flame, Jackdoor, and... um... Mitzi. The latter, by the way, is male. This made me smile, and is a good indicator of the quirky sense of humour that runs throughout the novel, one that Rhodes injects into the novel at decent intervals and to good effect.

One thing that cannot go without being mentioned, however, is the must-be-meant-to-be-Cockney accent that Monster sometimes has. It’s irritating in the extreme; “Stone the bleedin’ crows... What the ’ell happened to you?” British people don’t all speak like this!

Overall, and as already mentioned, I had difficulty getting into this novel. It feels over-written and in desperate need of another editorial do-over, or at least a little more input from the editor, who should have helped streamline the novel by utilising his/her red pen to greater effect. Dan Abnett’s recommendation on the back of the book was sadly off the mark: “Taut and gripping. Natasha Rhodes’s prose is that precious thing: the stuff you just can’t put down…” Unfortunately, I had a little bit of trouble picking them up in the first place, and the ‘tautness’ of the novel is certainly up for debate.

The premise promised so much potential for an interesting and original supernatural thriller, but it was sadly let down by the writing itself, though not all of it. Rhodes has a great imagination, and has created some interesting characters and a world filled with possibilities for dark fantasy fun. The book could, however, probably have done with losing 100 pages or so.

I wanted to like this novel, but sadly I just couldn’t get to the point of feeling involved in it, or invested in the characters. Therefore, a cautious recommendation; only try this if you’re prepared to give it the time and – unfortunate to have to use this word – effort. Maybe with time Rhodes and her editor will become a little more confident in cutting tautologies and extraneous or superfluous passages that hinder the flow and pace of the novel.

(N.B. I will happily accept that I’m not overly familiar with the genre, so don’t know how this measures up to others of its ilk. So, if I have somehow just ‘not got it’, then I recommend seeking other opinions and reviews from those more versed in the ways of supernatural thrillers/urban fantasy.)

[If anyone has an alternative perspective or opinion, I will happily publish it on here if you email it to me, or post it as a comment.]