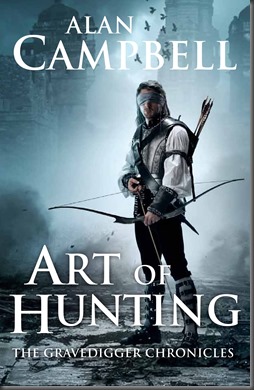 The first novel in Alan Campbell’s Gravedigger Chronicles, Sea of Ghosts, is one of my favourite novels from 2011. After reading that, though, I haven’t heard much at all from Mr. Campbell. The author, who also wrote the Deepgate Codex trilogy – Scar Night, Iron Angel and God of Clocks – is an fabulously talented fellow, in my opinion, and I’ve been desperately keeping my eyes open for information about his next novel. (Interestingly, or perhaps weirdly, I was reading his blog before I ever started this one. His and Joe Abercrombie’s… Anyway.)

Thanks to a work-requirement to read Locus magazine, I spotted a mention that Alan Campbell’s Art of Hunting is on its way, and it is the sequel to Sea of Ghosts! This has made me ridiculously happy (and impatient). Here’s the synopsis…

The Haurstaf have been decimated. The Unmer have seized the palace at Awl. Ianthe’s father carries her to safety. But she is not interested in a life of treasure hunting with him. She returns to the palace, hoping to find the Unmer prince with whom she shared some of her darkest moments.

Prince Paulus Marquetta discovers a friend and ally in Ianthe, albeit a dangerous one. She has the power to destroy his mind with a single thought, and yet she herself remains at risk from his own innate sorcerous abilities. The handsome young prince could murder her with a simple touch.

Briana Marks, meanwhile, has escaped with her life. Fearful of Marquetta’s rule, she travels to the Dragon Isles to seek out the exiled Unmer lord, Argusto Conquillas and beg him to help her assassinate Ianthe. When Granger learns of this plot to kill his daughter, he must use every scrap of his resourcefulness and cunning to protect her.

Maskelyne returns to Scythe Island to study the crystal he plucked from the wreckage of the Unmer chariot. The artifact leads him to discover exactly why the Drowned continue to deposit thousands upon thousands of keys on the beach beneath his fortress. The Unmer, in their quest to unlock the secrets of the universe, forged a monster. Now Maskelyne knows where this thing is imprisoned...

Art of Hunting is due out in November 2013, published by Tor in the UK.