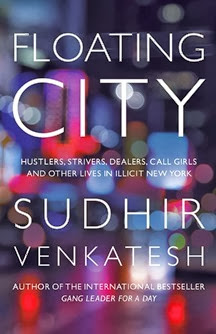 Amidst the trust-funder cocktail parties, midtown strip clubs, and immigrant-run sex shops, he discovers a surprisingly fluid and dynamic social world – one that can be found in global cities everywhere – as traditional boundaries between class, race and neighbourhood dissolve. In Floating City, Venkatesh explores New York from high to low, tracing the invisible threads that bind a handful of ambitious urban hustlers, from a Harvard-educated socialite running a high-end escort service to a Harlem crack dealer adapting to changing demands by selling cocaine to hedge fund managers and downtown artists. In the process, and as he questions his own reasons for going deeper into this subterranean world, Venkatesh finds something truly unexpected – community.

Floating City is Venkatesh’s journey through the “vast invisible continent” of New York's underground economy – a thriving yet largely unseen world that exists in parallel to our own, at the heart of every city.

I first came across Sudhir Venkatesh’s name in Freakonomics – as, I’m sure, did many non-sociologists. In Levitt’s book, Venkatesh contributed a small selection of his work with the crack gangs in Chicago. This study would go on to form much of Gang Leader For A Day, the author’s previous book. Venkatesh is a rare academic: he can write in such an engaging, riveting style, that his books read almost like novels. In Floating City, the ethnographer turns his gaze on New York City and its underground economy. This is, while flawed in minor ways, easily one of the best non-fiction works I’ve read in a number of years.

It would be easy to share quotations and detailed descriptions of so much of this book and the people Venkatesh got to know. It is a wonderfully-told narrative - from the first chapter, in which he discovers a long-time acquaintance from Harvard is also a high-class New York madam, to the final chapter in which he effectively bids farewell to his contacts and, in truth, new friends. I read the book in three days, blitzing my way through the chapters.

Venkatesh touches not only upon the criminal activities his contacts take part in, but also the economic and social repercussions of the lives they find themselves living. It is sometimes inspirational, but often it is also heart-wrenching, seeing the damage (personal and collateral) that the lives of call-girls, drug smugglers, illegal immigrants, and so forth can cause. True, one must have been living under a rock (or, perhaps, the rarefied penthouses along Central Park) to not be aware, even superficially, in the plight of the poor, the difficulties that face those who are forced by situation to operate in the black markets. Venkatesh is a sympathetic, eloquent guide to the New York underbelly.

There are a fair few poignant moments, and events that Venkatesh witnesses which are near-universal experiences for those from broken or unhappy homes. For example, he joins a contact’s family for dinner. Because of their difficult situation, however, a fight breaks out, and Venkatesh says he’ll put their awakened son back to bed. The scene is very affecting:

“Joshi refused my offer to read and got down on the floor and took a plastic soldier in each hand, speaking to them softly while moving them across his raised knees. The sight shot the ache of an old memory through me. So many times I did the exact same thing, hiding in my room while my mother raised her voice against my father... With the raised voices of his parents beating through the door, Joshi put his soldiers on sentry duty and got into bed. Would he | remember this moment for the rest of his life? Would part of him always be ten years old and anchored to the battlefield of his bedroom floor, fighting an imaginary war to distract himself from the source of pain?” 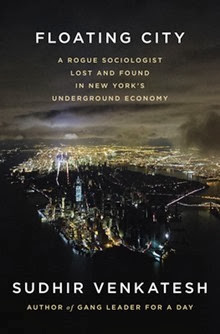 The author frequently mentions and discusses his struggles against academia’s, and especially Columbia’s disdain for “popular” sociology books and articles, aimed at reaching wider markets. If not targeted solely at fellow academics, a study will be dismissed as “journalistic”, as if that were the height of criticism. As someone who very much does not write in a conventional “academic” style, partly due to journalistic training, and partly my belief that hoarding knowledge is a guaranteed path to academic and professional destruction and irrelevance, I found Venkatesh’s style refreshing and quite brave. (True, the events and research he details in the book are from a decade and more ago, but still.) At one point in the book, the author recounts a conversation with the chair of Columbia University’s sociology department, who cautioned him, “It will never take the place of real, deep sociology... Just don’t be confused about that.” Nevertheless, I am very grateful that Venkatesh chose to aim for a broader audience.

His inviting style and approach does often place him at the centre of certain scenes. That does pose issues of academic and/or scientific detachment (recognised by the author), but also move this book beyond pure, accessible sociology and somewhat into the memoir genre. As he says at the end, the book is intended as a research memoir of sorts. It works, in my opinion, and I welcomed the personal reflection, and the Schrödinger-effect his participation clearly created in certain situations. If not for his research, for example, would his drug dealer contact have ever met up with his secretly-a-madam acquaintance at the art gallery? You get a sense of his professional anxieties, how his desire to really pull back the curtain of New York’s illicit subculture for a wider audience, hamstrung by some of his tenured colleagues’ disdain for letting non-academics getting a look at the goods (if you will).

“... tale[s] of improvisation in a world of shifting values and social roles. And if the upper-end madam and the ghetto thug were both improvising their supposedly fixed social-roles, if their way of relating and even their styles were subject to such rapid revisions – as if they were merely a fiction agreed on between two people – then it was a short step to admitting that succeeding in a life of crime wasn’t so different from making art. The global city, like the canvas, provided the structure, but the rest was in the individual’s hands, making each [person]... a kind of artist whose art and job consisted in crafting the latest, most up-to-date version of themselves and offering it to a city for final judgement. Is this the ‘me’ that will finally make it?”

To observe something is to change it. Through Venkatesh’s observations, and the wealth of detail and data he has compiled, perhaps we will see a genuine and positive change in the way society, city and national governments address and understand criminal activity, the ‘war on poverty’, and also the American Dream in the ever-changing, ever-more-complex 21st Century city.

Floating City is out now – published by Allen Lane/Penguin in the UK, and Penguin Press in the US.