“Before the Fall” by Francis Knight (Orbit) 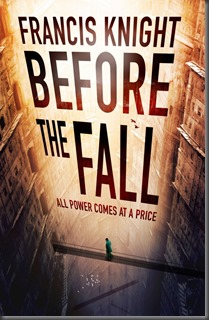 Rojan Dizon’s second outing – good, but unfortunately doesn’t live up to potential of book one

MAHALA IS A CITY OF CONTRASTS: LIGHT AND DARK. HOPE AND DESPAIR.

Rojan Dizon just wants to keep his head down. But his worst nightmare is around the corner.

With the destruction of their power source, his city is in crisis: riots are breaking out, mages are being murdered, and the city is divided. But Rojan’s hunt for the killers will make him responsible for all-out anarchy. Either that, or an all-out war.

Back in January, I developed a bit of a book-crush on Fade to Black, the first book in Knight’s Rojan Dizon series. (I believe “ZOMG!” and “amazeballs” were used in the review…) It was with great anticipation, therefore, that I awaited the arrival of Before the Fall. As it turns out, though, this sophomore novel did not live up to my expectations. It retains the marvellous world (well-realised and atmospheric), fascinating and dark magic system, and generally interesting characters. But… Well, there were a lot of issues that I ordinarily would only have expected in a debut novel. Sad to say, this just didn’t grab me as much as the first.

It’s impossible to write about this series without commenting on the world-building. Knight has created and realised a superb setting for her characters: it is a vertical city, hemmed in by mountains (and other, potentially hostile nations). The rich live at the top, and affluence decreases the further down you go. It is a city of suspicions and paranoia in both the lower and upper levels – the Specials keeping order, and strata envy and snobbery all working to keep everyone in their proper place. It is a wonderfully dark and atmospheric setting, and Knight fills the book with great passages that fill out our mental image of the city. (I do hope there are more than three set in it.)

While the character are all interesting and varied, I felt like Before the Fall didn’t advance them as much as I would have liked. Rojan, who should have been a riveting protagonist (partly because of his actions in Fade to Black, but also because of his magic, situation, and so forth), felt flatter than before. The first one hundred pages were frustratingly repetitive in the minutiae – Knight/Rojan frequently informs us that the Black is so close, calling to Rojan whenever he uses his magic; just as we are too frequently informed that everything has become Rojan’s responsibility. On top of that, we also get rather a lot of why and what he likes about women, then how he’s sworn off women but keeps “falling off the wagon”, how he is supposedly suave (yet surrounded by women who are unattainable). We get that he’s a bit of a philanderer and lover of many women, don’t need to keep telling us. It just felt like we got too much of that sort of thing – if this were a movie, it would be like an over-abundance of establishing shots. There is also more-than-necessary rehashing of what happened in the first novel (but, strangely, without as much detail as would perhaps have been useful?). That’s all a bit vague, for which I apologise – I want to avoid offering spoilers for the first novel as well as this one. All of this makes Rojan a less-than-compelling guide for more of the novel than I expected, this time around. Certainly, there are times when he’s an engaging protagonist, and his connection, affection and objection to his own magic is interesting. Also (and this is perhaps a strange thing to notice), but there was a higher-than-average use of the word “fuck” in the first 100 pages or so.

In addition to my issues with characterisation, the main plot took a little too long to get going, and with the repetitious nature of the character-building, it just didn’t hook me for much time. There were fits and starts, when I would devour larger chunks of the story in short sittings, followed by lulls. Par for the course for most novels, I suppose, but it was a noticeably different reading experience to the one I had for Fade to Black. This is a pity, as the investigation and state of affairs are interesting – the fact that Knight discusses how the destruction of the city’s energy source and supply has effected the city and its population is interesting and well done. In this respect, we really get the feeling that the City itself is a character, and I certainly liked the fact that tangible social and economic upheaval was having realistic repercussions on Knight’s world and characters. Public unrest, simmering suspicions and paranoia, and outbursts of misplaced violence are frequent themes.

Overall, then, I would characterise Before the Fall very much as a bridging installment to the series. Take it as a middle-act, rather than a stand-alone, and I think people will find it much easier to overlook its flaws. I was very disappointed that I didn’t love this as much as the first book. I nevertheless look forward to the final novel, Last to Rise, which is due to be published in November 2013.