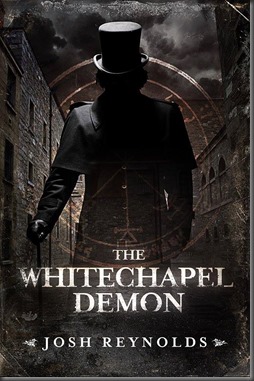 I’m only familiar with Joshua Reynolds through his work for Black Library (and have particularly impressed with his contributions to the Gotrek & Felix series). I spotted this via his Facebook page, though, and was rather intrigued…

JOHN DEE WAS THE FIRST.

Formed during the reign of Elizabeth I, the post of the Royal Occultist was created to safeguard the British Empire against threats occult, otherworldly, infernal and divine.

It is now 1920, and the title and offices have fallen to Charles St. Cyprian. Accompanied by his apprentice Ebe Gallowglass, they defend the battered empire from the forces of darkness.

In the wake of a séance gone wrong, a monstrous killer is summoned from the depths of nightmare by a deadly murder-cult. The entity hunts its prey with inhuman tenacity even as its worshippers stop at nothing to bring the entity into its full power…

It’s up to St. Cyprian and Gallowglass to stop the bloodthirsty horror before another notch is added to its gory tally, but will they become the next victims of the horror disguised as London’s most famous killer?

In the tradition of William Hope Hodgson’s Carnacki the Ghost-Finder, Josh Reynolds presents the Adventures of the Royal Occultist. Join Charles St. Cyprian and Ebe Gallowglass as they race to halt the workings of a sinister secret society and put an end to the monstrous manifestation in... THE WHITECHAPEL DEMON!

The novel will be published by Emby Press in November 2013.