Wait, Marvel’s rolling out what, now…? (This is not a joke, but it reads like one)

Not so long ago, Marvel unrolled its not-a-reboot-honest Marvel NOW initiative. In their latest move of re-branding (or added-branding?), the company announced today that in December we will see… All-New Marvel NOW! I find this rather funny. Is this the “and a cherry on top” approach to branding? And I now wonder how long it will be before we see “Ultimate Marvel NOW!”…? Naturally, I meet this announcement with some mockery and sarcasm, but believe it comes from a place of endearment.

Here’s what the press release had to say about it… 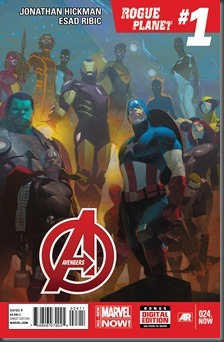 This new initiative will start in December, when Avengers #24.NOW (which is Avengers #1 in All-New Marvel NOW!), which is helmed by Jonathan Hickman (Infinity, Avengers) and Esad Ribic (Thor: God Of Thunder, Uncanny X-Force). This issue, the release say, will lead the Marvel Universe in “a bold new direction”. At least one new series will be launched every week. The publisher is going for “unique mission statements, epic scales, and bigger conflicts than ever before” in their new series. I hope this doesn’t mean story is going to take a back-seat to pyrotechnics – at least keep it a little bit more Bruckheimer and less Bay, ok? Judging by the synopsis (brief as it is), I may not get my wish. In Avengers #24.NOW,  the Avengers team must re-assemble like never before after the devastating events of Infinity. In the wake of that game-changer (and the endless, previous game-changers)…

“As a rogue planet hurtles towards Earth, only the mightier-than-ever Avengers can prevent the annihilation of two worlds!” 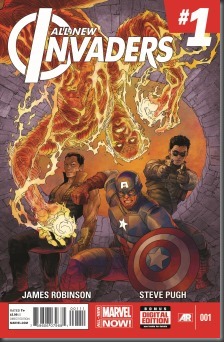 In January, ANMN (sorry, I feel silly writing the full title) heads “to the battlefront” with James Robinson and Steve Pugh’s All-New Invaders #1. Robinson, the Eisner Award-Winning writer of (among others) Starman and Earth 2 recently exited his roles and series for DC Comics as part of the (now-well-documented) editorial issues facing Marvel’s number one rival. Steve Pugh has come to prominence for his work on Animal Man (talented fellow). This series actually sounds pretty cool, and I’m looking forward to seeing Robinson et al meet expectations:

“Brothers-in-arms Captain America, The Winter Soldier, Namor, and the Original Human Torch re-band for an all-new, all-different kind of war! But when the Kree Empire discovers a way to weaponize Norse Gods, can these timeless allies survive the deadly cosmic trenches?” 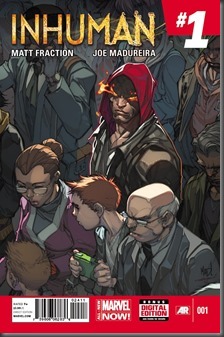 Also in early 2014, Marvel’s new initiative will be asking, “Are You Inhuman?” (This necessitated a lot of “teasing-but-not-compelling” images that simply had “Is he?” and “Are they?” written on smokey backgrounds…)

This third series, Inhuman, will be written by Matt Fraction (the writer of the incredible, near-perfect Hawkeye) and artist Joe Madureira (Avenging Spider-Man, Savage Wolverine – let’s skip over the fact that Madureira’s name is misspelled in the press-release). Fraction’s involvement makes my ears and interest prick up, certainly, so I am sure I’ll be reading at least the first story-arc. The series “thrust[s] the Inhumans into the spotlight as the newest power players in the entire Marvel Universe.” Showing my ignorance, I have no idea who the “Inhumans” are (or what makes them different to mutants), or what this is all about. Inhumans also unfolds in the wake of the cataclysmic Infinity event, as new Inhumans spring up around the globe forcing the once-secret society out into civilization:

“With Avengers-level powers and abilities, will they chose to stand with Earth’s Mightiest… or against them? As the chaos consumes the globe, discover the fate of King Black Bolt and his royal family as the world becomes Inhuman!”

I have no idea what this means for any of the old Marvel NOW titles. This endless re-branding, though, makes me concerned about following Marvel’s titles. Coupled with the flurry of cross-over events, I’m just not that interested to fork out quite as much money as would be needed to keep all the stories straight. And also because, thus-far, I haven’t been too impressed by the Events, all of which have fallen a bit flat towards the end, and not delivered on the over-hyped promise. At the moment, I’m only following three of the newer series: the aforementioned, awesome Hawkeye, and also Ultimate Comics Spider-Man (really like Miles’s story), and Ultimate Comics X-Men (rather enjoying this, too). I also recently picked up the rest of the pre-Marvel NOW X-Men series (another ComiXology sale), because I like the characters.

[And hey, CBR regurgitated the whole press-release, hyperbole and all! Seriously? No commentary?]

Posted by Civilian Reader at 8:02 PM