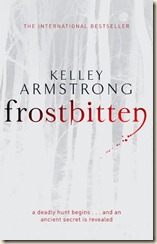 Book 10 of the hugely popular Women of the Otherworld series

After years of struggle, Elena Michaels (journalist, investigator, werewolf) has finally come to terms with her strange fate, and learned how to control her wild side.

At least, that’s what she believes when she sets off to Alaska with her partner Clay. A series of gruesome maulings and murders outside Anchorage seem to implicate a rogue band of werewolves. But the truth is far more complicated. Trapped in a frozen, unforgiving terrain, they are forced to confront a deadly secret, and their own, untamed nature…

Continuing the story of Elena, the only female werewolf in the world, this is a gripping, supernatural read. Elena and her mate, Clay, travel to Alaska in order to investigate some reported deaths from wolf-attack. Unfortunately for the werewolf couple, real wolves are the least of the problems facing the residents of Anchorage…

Lots of blood, guts and gore ensue, and we meet some new monsters to add to the already impressive Otherworld bestiary.

A great piece of ‘urban fantasy’ fiction (to use the catch-all genre name for such novels), Frostbitten effortlessly combines the real world and the paranormal in a way that really brings it to life on the page. Armstrong’s characters are well defined and believable, which just makes it all the more engrossing (as one might expect after so many successful previous volumes – which I have not actually read, I must admit – something that shall be rectified ASAP).

Fast paced and great fun, I couldn’t put this down. Highly recommended for fans of both the author and urban fantasy/werewolf fiction as a whole.

Also by Armstrong: Nadia Stafford thrillers (Exit Strategy & Made To Be Broken); The Darkest Powers Series (The Summoning, The Awakening, The Reckoning & The Gathering – April 2011)