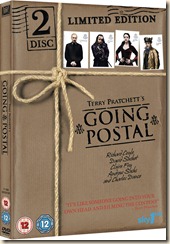 Moist von Lipwig is an exceptional con artist faced with a difficult life-choice: the hangman’s noose or Lord Vetinari’s offer to become Ankh-Morpork’s next postmaster.

Hoping for an easy escape, Lipwig chooses the Post Office, but soon discovers that it’s understaffed, overflowing with undelivered mail and notoriously hazardous to a would-be postmaster’s health. But you can’t keep a good conman down and, despite the best efforts of Clacks’ Chairman, the devious Reacher Gilt, Lipwig is determined to turn around the fortunes of the ailing postal system.

It’s not going to be easy, but assisted by Junior Postman Groat, pin-obsessed Stanley, beautiful chain-smokeing Adora Belle Dearheart, and an army of golems, there’s always a plan for a man who’s prepared to push the envelope…

This is the third TV adaptation of a Terry Pratchett novel and, finally, they seem to have got it mostly right. Hogfather was pretty good, even if the acting was a little too hammy for my taste; and The Colour of Magic was rather terrible, which meant I never finished watching it (the actors hammed it up way too much, and even Jeremy Irons was a huge disappointment).

The actors cast in Going Postal, however, are quite brilliant. Richard Coyle’s Moist Von Lipwig is totally believable as a loveable rogue, pulling of the role with only a hint of overdoing it; David Suchet (onetime Poirot) is dastardly villainous as Reacher Gilt – featuring more in the second episode than the first; Claire Foy’s Adora Belle Dearheart is superb, and is extremely close to how I imagined the character, getting just the right mix of righteousness and goth-laden charm; Charles Dance is brilliant as Lord Vetinari, the ruler of Ankh-Morpork, and certainly miles better than Jeremy Irons’s portrayal in The Colour of Magic, which was surprisingly stupid (with an utterly ridiculous lisp thrown in for gods-only-know-what-reason). The only character that bothered me was the banshee, but I also can’t think how else to have done him. The golems are well-designed, and Mr Pump is both intimidating and (at the end) rather sweet.

Of course, even at three-hours long, everything from the novel couldn’t be covered or included, but the producers have done a great job of teasing out the main elements needed to make the story work in the short time-frame. Some of the best jokes are missing (the case in all adaptations of Pratchett’s work – whether live-action, or in the cringe-worthy cartoon versions), but that’s not a problem – Going Postal is still funny, wry, extremely watchable, and never dragged. 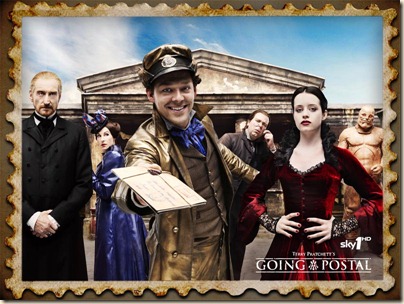 A must-see for all fans of the Discworld novels, this is certainly the best adaptation thus-far, and is thoroughly entertaining. The cast, the writing, and also the production are superb – the attention to detail that has gone into making the set is phenomenal, and everything just works so well, bringing the Discworld vividly and realistically to life.

Adaptations always fall short of expectations, and will never be as enjoyable or as loved as the novels. Going Postal comes close, but still falls just short. That being said, I really hope they adapt the next Moist Von Lipwig novel (Making Money) in the near future. Or maybe the City Guards novels.

Posted by Civilian Reader at 1:42 AM