The First Heretic is not quite ready for a review (it’s not released until November, so I’m saving it for next month), but the author has filmed a short video introducing and describing the latest instalment to the New York Times bestselling Horus Heresy series. After two exceptional titles – A Thousand Sons and Nemesis – there is a lot of expectation riding on The First Heretic, and I for one can’t wait to read it.
Anyway, here’s the video:


Also, because I can never resist including the great artwork Black Library gets for its novels, here’s the novel synopsis and art: 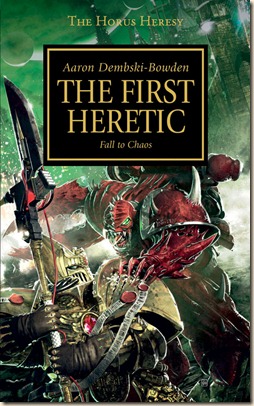 Amidst the galaxy-wide war of the Great Crusade, the Emperor castigates the Word Bearers for their worship. Distraught at this judgement, Lorgar and his Legion seek another path while devastating world after world, venting their fury and fervour on the battlefield. Their search for a new purpose leads them to the edge of the material universe, where they meet ancient forces far more powerful than they could have imagined. Having set out to illuminate the Imperium, the corruption of Chaos takes hold and their path to damnation begins.

With any luck, I’ll get to this novel very soon. The Horus Heresy novels, as I’ve said many times on this blog, are just getting better and better. If you haven’t read them yet, then I strongly advise you to start!
The next Black Library review will be for Nathan Long’s Zombieslayer, the next instalment in the Gotrek & Felix Warhammer series.
Posted by Civilian Reader at 5:52 PM