“The Fort”, by Bernard Cornwell (HarperCollins) 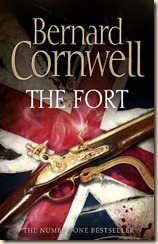 Cornwell returns his attention to the United States

Summer 1779, a British force of fewer than one thousand Scottish infantry were sent to build a garrison in the State of Maine. The war of Independence was in its third year and no other British troops stood between Canada and New York.

The State of Massachusetts was determined to expel the British, but when they sent a fleet of forty vessels to ‘captivate, kill and destroy’ they underestimated their enemies, calm in battle and ready for victory.

Told from both sides of the battle, the main characters are all real figures from history. Based on diaries, letters and court transcripts, we meet many of the war’s greatest heroes, including Paul Revere and John Moore, each of whom become famous subjects of war poetry.

As a long-time fan of the author’s Sharpe series, I was eager to see what Cornwell would come up with when he turned his attention, once again, to American history. When I tried the Starbuck books (set during the Civil War), I couldn’t really get into them, but this was more an issue with me rather than Cornwell’s novels. I just wasn’t that interested at the time. Now, however, I am a little better versed in the time and setting, and so The Fort seems to have been perfectly timed to pique my interest. It’s also a great idea, and one I was eager to read. The novel is based on extensive documentary evidence from the period and of the events, so Cornwell has really delved deeply into the historical facts to construct his novel. However, this has a double-edged quality to it, and it is a very different novel to what I expected.

First, the good: the historical detail – from the mundane to the grander commentary on American life and society at the time – is brilliant, and meticulously researched. We get a great sense of both the righteousness and worry of the newly-free Colonials, and Cornwell delves into the factionalism that was already on the rise at this time (including the class struggle and the anti-Ivy League sentiments that would not be entirely out of place in today’s political discourse). The grand ideals that formed the basis of the Revolution are laid bare, frequent victims of simple human nature. For example, the American expedition sent to repel the Scottish forces, was seriously hampered by squabbling between Commodore Saltonstall and General Lovell over who should have command. Including characters such as Paul Revere (who was not quite the great patriot and warrior as American myth would have us believe) is a great draw for the novel, and Cornwell renders all of his characters well.

The novel includes a lot of detail of the lives of both loyalists and the rebels – religion remains a strong dictator of daily life for both, but the colonies need to contend with chronis under-supply of weapons, food, and almost everything else. There’s the occasional amusing aside or comment regarding military contractors – clearly, inflating costs for government contracts is nothing new… Cornwell also portrays the difference in quality of the American and British troops, and how that effected the outcome of the Expedition. The British were simply superior in almost every way, and so the outcome of this Expedition could perhaps have been considered a foregone conclusion. Then, however, you have to consider that the Americans ultimately won…

One could also not review a Cornwell novel without tipping one’s hat to the author’s considerable gift for writing action sequences – he remains one of the few authors who can write long battle scenes that keep my attention throughout, and convey the chaos and tension one might feel in such situations – not to mention delve convincingly into the psyches of those who will have to unwillingly face battle against an enemy so like themselves.

Unfortunately, the author’s apparent loyalty to the texts in existence has had a couple of negative effects on the novel. First, it is uneven – at times the dialogue feels natural and flows, the same for the narrative as a whole; then there are passages that are clearly influenced from written accounts, where the style changes (sometimes slightly, sometimes very noticeably), and changes the pace of the novel. There were a number of times when dialogue suddenly became extremely formal, rather than natural, and I can only suppose that it’s taken from written accounts of conversations or diaries of those present. While interesting on an intellectual level, it didn’t really work as fictional entertainment. The author has apparently been “fascinated” for a very long time with this period, and while this allows for a faithful reconstruction of the time, it also comes through as over-attention to detail to the apparent detriment to storytelling.

As always, Cornwell has done an incredible job of making sure his writing is accurate and deviates minimally for the purposes of his story. Unfortunately, the execution was uneven, and (in my humble opinion) not up to Cornwell’s usual standard. As an example in historical fiction writing, this is exceptional. But as an example of historical entertainment, it does not live up to the author’s previous writing. I may, of course, be entirely misunderstanding the point of the novel – as someone who has read all-but-one of the Sharpe novels, and was introduced to the author through his Archer series, I was perhaps expecting something a little more swashbuckling and adventurous, and a little more entertaining.

While this is an interesting novel, based on an interesting premise, and written by a very gifted author, I can’t help thinking that only Revolutionary-era historians will get the full benefit and experience of it. That being said, if you are interested in reading a novel about the Revolutionary War, by an author who is loyal to the actual historical events, and come to it not expecting Sharpe in America, then I believe you will probably enjoy The Fort.

Therefore, I offer a cautious recommendation.

Comments on the Kindle Edition

As the first novel I’ve read on the Kindle, I thought I would make a couple of comments on both the eBook itself and also the reading experience. First off, it’s still a pleasure to read on the device – the page turns are quick, and the device is comfortable to hold.

That being said, the quality of the eBook – like many I have bought for my Sony Reader – is not at all high. There were too many typos, punctuation substitutions, and other errors to be acceptable (particularly opening speech-marks, which are all-too-frequently missing). It remains clear that publishers don’t treat eBooks as carefully as printed and bound volumes. If they don’t allow these typos in printed books (especially for bestsellers like Cornwell), then they really shouldn’t be appearing here.

Considering that prices for eBooks tend to be pretty close to those of printed books (at least on Amazon and near publication date), I find this unfair to customers and extremely irritating as a reader. I don’t see an excuse for it – unless it is a fault of the conversion software. While I am willing to accept that this may account for some of the errors, there is one glaring error in The Fort that cannot easily be blamed on this. Specifically, when the titular fort is built, and the British leader christens it “Tort George”. Twice.