To borrow a couple of memes

Two posts from two bloggers I follow have caught my eye, so I thought I’d consolidate my responses to these memes into one post. The first, from The Speculative Scotsman, is a pretty short one, which I happened to be talking about yesterday with Alyssa (my newest writing-slave reviewer), so I liked that it was timely:

As reviewers, do you read other reviewers' reviews before composing your own?

Simple answer: no. In fact, I rarely read any reviews anymore, despite subscribing to so many RSS feeds from book bloggers. I guess it’s partly to avoid being (sub)consciously influenced by what people I respect have to say (which is actually limited to only a very few bloggers – who shall remain nameless, because we can’t be inflating any egos now…). It’s also because this site is predominantly reviews, so I would rather read more news and opinion pieces than reviews of books I might be reading, or will read in the future. It is, however, a weird feeling to discover a review that’s so similar to one I’ve written. I think the only reviews I read now are for books I’ve already read and/or reviewed. This can often be unhealthy, as I end up wishing my reviews were so insightful or, in some cases, literary (it’s a long time since I last studied literature, and I have a weird complex about not knowing all the proper phrases, sometimes). I do still read a lot of non-fiction reviews; not to influence my own, but mainly because I need to decide on what to buy for my PhD and my ever-growing collection of books on the US Presidents…

The second meme, which I came across in a post by Adam Christopher, is a little more involved and fun – and made me think of the “Top 5s…” from High Fidelity for some reason. There are a handful of books and/or series that could have been the answer for almost every question (Terry Pratchett, Scott Lynch, etc.), but I’ve tried to be as varied as possible to keep things vaguely interesting. So here are the questions (in bold) and my answers to each:

One Book that Changed my Life

This was quite an easy choice: James Clavell’s Tai-Pan, which I reviewed a little while ago, because it made me fall in love with reading ‘proper’ books. It had the unfortunate side-effect of also making it difficult to find other books as good or enjoyable for a while, but it is still a firm favourite and definitely a book that changed my life: mostly because it made me want to write.

I shall add another, which is important for a different reason. Scott Lynch’s The Lies of Locke Lamora, which opened my eyes to fantasy fiction again, and is also one of my favourite books of all time. It’s just brilliant and works on every single level for me. It is also one of the books I recommend most to other people…

… Except for everything Discworld by Terry Pratchett, which also goes in this category. Pratchett’s books showed me that ‘comic’ fantasy didn’t have to be ridiculous to be enjoyable, and that it could be intelligent and many-layered behind the jokes and gags. An exceptional talent who deserves every word of praise he’s ever received and more.

One Book you have to read more than once 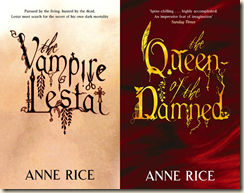 Anne Rice’s The Vampire Lestat and Queen of the Damned. I consider these novels as one, because I never read one without the other. They were re-released recently through Sphere, but I’ve been reading them for years. I even remember reading them in New York, when I lived there – one of my favourite winters, actually: the snow was deep and made the city even more beautiful, and I wandered the city, stopping at various coffee-shops to read my way through Rice’s first five vampire novels.

Lestat and Queen were written just as Rice was really taking off and producing her very best novels – her gift for description, atmosphere and scene-setting (perfectly employed in these two novels) are still unsurpassed, and she’s able to evoke powerful images and impressions of her characters’ emotions and also the different times and locations brilliantly. True, the series waned in impact as it continued (though I still really enjoyed Merrick, which properly brought her other series – The Mayfair Witches – into the timeline). I’ve read these two about four times, now, and I think I’ll be doing so again in the Autumn, when I’m hoping to get a review of the first five Vampire Chronicles written (Interview with the Vampire, The Vampire Lestat Lestat, The Queen of the Damned, The Tale of the Body Thief and Memnoch the Devil).

One Book you’d want on a Desert Island

I’m thinking something really long… If I had to choose something right this instant, I imagine I’d end up picking Justin Cronin’s The Passage, because it’s really long and I’ve only heard very good things about it.

But, to be really difficult, I’d actually take my eReader with me, because I have 90 books on it, and that should keep me going for bit. (I know, there’s always one person who has to answer ‘cleverly’…)

I’m possibly one of the biggest boosters for eBooks, as I adore my reader – so much, in fact, that I’ve rarely considered upgrading it to a new, touch-screen edition. (I’ll admit that I considered ordering a new, slate-coloured Kindle DX, but decided against it. I might also consider the new larger-screened Sony Reader, but it’s not available in the UK, yet.) 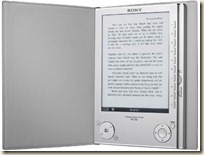 Two Books that made you Laugh

This would have to be a Discworld novel. It’s difficult to choose just the one, though. Probably something from the Guards selection: Guards Guards, Men at Arms, Feet of Clay, Jingo, Fifth Elephant, Night Watch, and Thud!

That being said, there are a couple other Discworld novels that have made me laugh. Hogfather, because it is all-round brilliant and I still quote plentifully from it. The Truth, also, is a great novel and I like the central focus on the press and media. Also, it’s a novel that has meant I can’t help but find the name ING Direct funny (just read it, you’ll understand). 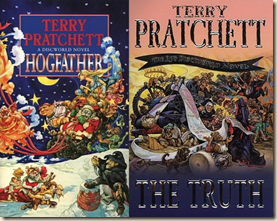 One Book that made you Cry

I haven’t cried at a book for years. Sorry, I just don’t tend to cry because of something I’ve read.

When I was younger, however, I did cry when one of my favourite characters in Brian Jacques’s Martin the Warrior (1993) died… It was a series I was completely in love with when I was a kid. Martin the Warrior, the sixth in the series (now at 21 books), was the last that I read. Jacques, as I recall, had a great skill at making his (young) readers feel connected to his characters, despite them being anthropomorphised rodents and small woodland creatures. The memories are just swarming back, now…

Anyway, let’s move on. A couple of things that do make me cry, are the first couple episodes of The West Wing Season Two (I am rather obsessed with that series, and have become very enamoured with the characters during the multiple times I’ve re-watched all seven series), and most recently the movie The Blind Side, which I thought was amazing (and Sandra Bullock definitely deserved the Oscar!). 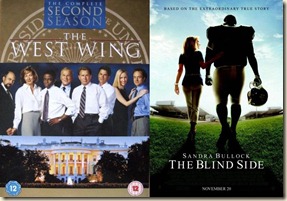 One Book you wish you’d Written

Scott Lynch’s The Lies of Locke Lamora, for reasons of excellence and sheer imaginative brilliance. Perhaps also Dan Brown’s The Da Vinci Code, because he made an absolute fortune from it. I would, of course, then write books I wanted to, hopefully better, without any fear of worrying whether or not I’d be able to afford to eat again…

Actually, the books I really wish I’d written are the ones I’m planning at the moment. Tentatively under the working series title The Amderlin Chronicles, they’re set in a world of my own making and I hope could be compared – in genre/style/setting (if not quality) – to Scott Lynch, Joe Abercrombie, James Enge, Brent Weeks and the like.

I’ve just started an  complete re-working of everything, so they’re still in the absolute basic stages of writing. I’ve got the basic story of the first three novels, as well as the international affairs environment they are set within, but I’m having difficulty working out the details. Not sure I’ll get too far on these until I’ve finished my PhD, however.

One Book you wish was NEVER Written

Amazingly, I can’t think of anything. I don’t like to be too negative about any books, as I always assume that there is someone, somewhere, who will like every book – even if it’s just the author’s mum. I shall demure, therefore, from answering this question.

Two Books you are Currently Reading

John Sandford’s Storm Prey – the 20th in the Lucas Davenport/Prey series, and shaping up quite well – although, Sandford is unusually giving a little too much detail of a surgery that helps anchor the story as a backdrop (it’s interesting, but do we need that much detail?). I’m a big fan of Sandford’s series, having read most of these in order and in one go, when I discovered them – my first was Certain Prey (released in 1999 in the US, but I read it in 2004).

Evan Thomas’s The War Lovers – perhaps the best book I’ve read about 19th/20th turn-of-the-century US history. Brilliantly written, researched and crafted, this is easily one of my favourite books of the year, and favourite history books ever. Simply amazing. Theodore Roosevelt is one of my favourite presidents, and the portrait of him in The War Lovers is one of the best I’ve come across – Thomas offers neither damning nor a glowing characterisation. TR’s friendship with Henry Cabot Lodge is equally fascinating. Overall, this is a fascinating book on one of my favourite periods of US history. (I will hopefully have the review done very soon, work permitting.)

One Book you’ve been Meaning to Read

As I am wont to do, I’ve done my own thing and come up with two (from an ever-growing list): Patrick Rothfuss’s The Name of the Wind and Michael Chabon’s The Amazing Adventures of Kavalier & Clay. Both of them have received a ridiculous amount of praise from all quarters – particularly the latter, which has been recommended to me by two of the people whose opinion I value and respect above all others. Considering its size, and the growing pile of books I have to review, however, it keeps getting put to the side. I’ve heard amazing things about Chabon’s writing, but have thus far only read a few samples of his non-fiction articles (specifically, his essays about genre narratives and superheroes).

Rothfuss’s The Name of the Wind is a book that has sat on my shelf ever since it came out in paperback in the UK. Unfortunately, it came out just as I started to receive more books for review, which meant I focussed more on getting those read and reviewed than NotW read. I still intend to read it soon, but we know how flexible my plans and timetables can be…

So, that’s my take on these two memes. Hope they were in some way interesting. (Though, in all honesty, they were more self-indulgent than anything else.)