The Kindle is Coming to Blighty

So, Amazon are finally releasing a Kindle for the UK, and adding a Kindle eBook store to their Amazon.co.uk site. 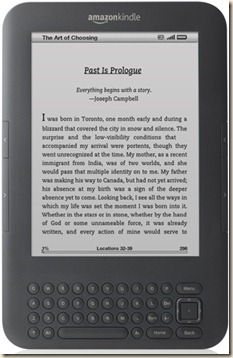 Should we care? Should we be upset in the UK at getting it a year later than the US?

The release is all well and good, but I have one question: why don’t they open the Kindle to the ePub format? For this reason alone, I am leaning towards rather upset…

I could be wrong, but I believe all the eReaders available in the UK (and many in the US, for that matter) read ePub format – indeed, the Sony Reader switched from its proprietary BBeB format to ePub sometime this past year. eBook stores sell ePub editions (in the UK, Waterstone’s and WHSmith’s seem to be the best vendors, and they sell predominantly ePub formats), so those who have adopted e-reading up until now will be somewhat screwed. As there’s been no real mention of the UK Kindle for some time – at least, not with any concrete information or dates – I wouldn’t be surprised if people gave up (I know I did, and I’ve been obsessive about eBook and eReaders since the beginning!).

Does Amazon really believe it’ll be able to get people to buy the Kindle in addition to other readers? True, it’s ridiculously cheap, when all things are considered: the Wireless-only device is £109, and the Wireless and 3G device will be £149 – great prices, in fact, when you consider it’s closest rival (or similar physical size) is more expensive, and the 3G device doesn’t require a monthly data-plan. But how many people will want to juggle two eReaders?

As someone who has been using a Sony Reader for about a year and a half, I must admit to still being tempted by the Kindle – it’s a gorgeous piece of kit (the new ‘slate’ colour is so much nicer than the horrible white), I’m an absolute technophile, and the price is impressively generous (unlike the iPad…). But, I have almost 100 ePub eBooks, and I really don’t want the hassle of having to keep track of which device I have this or that book on – it would also defeat the purpose of their portability, if I had to take two on holiday/business, wouldn’t it?

There’s no news on how much the eBooks will be, through the UK store, but they have apparently said that Amazon will be setting the prices, rather than the publishers (as in the US). This might be a way to lure in new users and also committed e-readers, but it’ll probably go the way of Waterstone’s and others’ sites as eBook prices rise in the future (don’t get me started on this – it’s one of my biggest gripes, that eBook prices don’t change after a book has been released in paperback).

Now I wonder if a UK version of the Kindle DX (larger screen) will be released anytime soon? Maybe in time for Christmas?

Anyway, I just wanted to throw that out there, on the off-chance it reaches someone with the ability to do something about my gripes.

(I don’t know anyone else with an eReader, so not a clue what other users think. Feel free to chip in, if you have an opinion.)