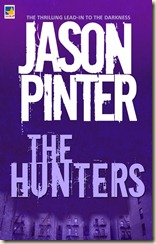 Free eBook from a great new voice in Thrillers

After one of the most harrowing weeks of Henry Parker’s life, night has finally come. Settled in with Amanda Davies, he sleeps before preparing to chase a story alongside his mentor, Jack O'Donnell.

Meanwhile Jack sits on the other side of town, fresh out of rehab, hoping to salvage a once-great career derailed by public humiliation. This is Jack's last chance to leave his mark.

Elsewhere in the city, two killers are on the move. They are brutal, calculating, and after tonight their decade’s long plan will come to fruition. But before the morning comes they have a few stops to make...

This eBook forms a bridge between The Fury and The Darkness. The story takes place in the single night that sits between the two novels.

The Hunters is very much laying the groundwork for The Darkness, and a couple of characters that arrived at the end of The Fury are fleshed out a little more (the ‘hunters’ of the title), as a brutal consolidation of New York’s criminal underbelly continues and loose ends created by the events of the previous novel are tied up. As always, Pinter’s gift for bringing to life the seedy underbelly of New York is on brilliant display once again.

Henry Parker is moving in with his girlfriend, Amanda, after the difficult events of The Fury - they are recently reconciled after Parker’s risk-taking and uncanny ability to get into trouble became too much for her; Jack O’Donnell returns home after his stint in rehab, and begins the process of resurrecting his life and career.

Technically, Pinter’s not a “new” voice in the genre any more – The Darkness will be his fifth novel, after all, but he still seems very young and new. That is not a veiled way of me criticising his writing – far from it, as his novels are great fun to read, and improve with each new book.

Along with the short story, the eBook comes with an exclusive note from Pinter to readers (mainly a very nice “thank you” and introduction to the series and characters), and a handy “Who’s Who” of the characters in the Henry Parker series (this was very handy, as it had been a while – and a great many books – since I last read a Pinter novel). If The Hunters has whet your appetite for the next in the series, then you’ll be glad to know the eBook also comes with an exclusive excerpt from The Darkness.

All in all, I would say this is a pretty good freebie from a good up-and-coming thriller author. The story doesn’t really go anywhere, as you will need to read The Darkness in order to see where the story is going, but I would say it’s well worth a look. If I wasn’t already a fan of the series, my interest would certainly have been piqued by reading The Hunters. It certainly made me re-shuffle my review schedule, as I became enamoured once again with the characters – The Darkness will be reviewed very soon.

[The eBook can be downloaded from Pinter’s blog]