“Deliver Us From Evil”, by David Baldacci (Grand Central/Pan) 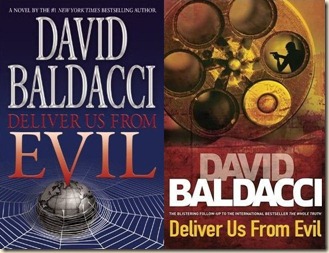 The latest international thriller from a master of the genre

Evan Waller is a monster. He has built a fortune from his willingness to buy and sell anything… and anyone. In search of new opportunities, Waller has just begun a new business venture: one that could lead to millions of deaths all over the globe.

On Waller’s trail is Shaw, the mysterious operative from The Whole Truth, who must prevent Waller from closing his latest deal. Shaw’s one chance to bring him down will come in the most unlikely of places: a serene, bucolic village in Provence.

But Waller’s depravity and ruthlessness go deeper than Shaw knows. And now, there is someone else pursuing Waller in Provence — Reggie Campion, an agent for a secret vigilante group headquartered in a musty old English estate — and she has an agenda of her own.

Hunting the same man, unaware of each other’s mission, Shaw and Reggie will be caught in a deadly duel of nerve and wits.

This is the second book in Baldacci’s Shaw series, following on from the highly successful, and enjoyable The Whole Truth.

Shaw’s operation to deal with Waller is a cold example of “the lesser of two evils”; cold, hard realism in an ever-more dangerous, interconnected world. His handlers are aware of Waller’s sex-trafficking business, but are more concerned by his recent foray into nuclear arms dealing, and are willing to let the former slide if they can just prevent the latter. They’re reaction to Regina’s operation also adheres strongly to a realpolitik approach to international relations, and is presented in a well-conceived and considered manner (it’s not some conspiracy-loving critique, for example).

Regina’s outfit is an interesting one. A group of vigilantes, loosely connected, executing designated ‘monsters’ as their identities become known. It’s not entirely clear what each of the team’s members’ motivations are. Regina’s past is only revealed very late in the novel, and it was certainly a surprise, even if I didn’t see how it might explain her specific choice in profession.

“there will always be monsters. And we have to hunt down every one of them.”

Waller is looking for a “challenge” and believes moving from his steady, ludicrously profitable primary sex-trafficking business to weapons dealing with Muslim terrorists will provide both the needed challenge and a fresh experience. When the initial deal goes wrong, however, Waller vows to bring those responsible for betraying him to ‘justice’. Waller is a true monster: outwardly he is the calm and reasonable businessman he professes to be, but underneath he’s also a cold psychopath – just wait until Chapter 37 for his monstrous, chilling nature to be presented in rather gruesome detail.

One thing that surprised me about this novel was that, considering it’s meant to be the second in the Shaw series, it felt to me like he only featured in about a quarter of the novel (a third at most), with Regina’s story-line dominating, with Waller receiving roughly the same chapter-space as Shaw. This is one reason that might explain my disappointment with the novel, as it diverged a good deal from what I was expecting.

I always come to Baldacci’s novels with high expectations. With every one I’ve read, he has exceeded my expectations. For the first time, however, I am left a little underwhelmed. There’s just something about Deliver Us From Evil that didn’t quite click for me. The characters are good, and mostly well-rounded. The dialogue and prose are great – I flew through the chapters whenever I picked up the book, so it’s not a problem with Baldacci’s writing (always exceptional). It’s just the pacing of the story itself, and the progression of the plot doesn’t seem to work properly. There seems to be a lot of hurry-up-and-wait, or a stop-start feel to the narrative, and certain events felt anti-climactic, and things slow down too much on one too many instances. There are a couple of chapters which might be intended to be ‘cliffhangers’, but because the reader knows how much more of the book is left to go, they don’t achieve the intended outcome. The author sometimes loses the balance between exposition and storytelling, with – for the first time – his explanations of innovative elements of the story running a little too long, again diminishing the pace and impact of the story. One final thing that bothered me, was Shaw’s confused relationship with Katie James (who featured prominently in The Whole Truth and pops up a couple times here) and Regina – it is almost as if the author is as unsure as his character who Shaw should be with.

It frustrates me to write a review even partially negative for a Baldacci novel, but I’ve got to write the truth. This novel just didn’t have the impact of Baldacci’s other novels (all of which I’ve devoured with great enthusiasm and satisfaction), with a plot that meandered a little too much, and character interactions that failed to ignite. The final quarter of the novel redeemed itself well, and the final confrontation was pretty tense, but it was not enough to make me forget my occasional moments of indifference during the preceding chapters. I still eagerly await Hell’s Corner, the next book in Baldacci’s Camel Club series (published later this year), which has always been his strongest series, with his strongest characters.

Deliver Us From Evil will entertain, will keep you guessing (there are a fair few red herrings and switches), but might not be as fulfilling as previous novels from this brilliant author.