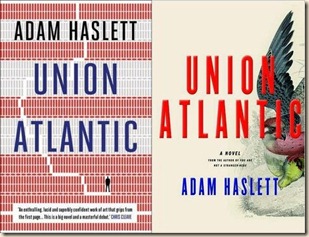 At the heart of Union Atlantic lies a test of wills between a young banker, Doug Fanning, and a retired schoolteacher, Charlotte Graves, whose two dogs have begun to speak to her.

When Doug builds an ostentatious mansion on land that Charlotte’s grandfather donated to the town of Finden, Massachusetts, she determines to oust him in court. Charlotte lives in self-imposed exile deep in the forests of rural Massachusetts, stubbornly refusing to engage with a country she feels to be morally bankrupt. When Fanning decides to build himself a sprawling mansion adjacent to her home, her isolation is threatened and she determines to evict him from his land and, if she can, his kind from her country.

Doug Fanning lives an apparently gilded existence. A Gulf war veteran turned banker at the vast investment bank Union Atlantic, he is wealthy, handsome and powerful – he is the epitome of Wall Street success. As a senior manager of Union Atlantic bank, a major financial conglomerate, Doug is embroiled in the company’s struggle to remain afloat. It is Charlotte’s brother, Henry Graves, the president of the New York Federal Reserve, who must keep a watchful eye on Union Atlantic and the entire financial system.

Drawn into Doug and Charlotte’s intensifying conflict is Nate Fuller, a troubled high-school senior who unwittingly stirs powerful emotions in each of them.

Haslett could not have written a more timely novel. At once this novel is both an indictment and examination of two separate ways of life: one of high-flying wealth, the other of understated and self-imposed austerity. Haslett has written for The New Yorker, Esquire, and The Atlantic (my favourite news periodical, I should say here) – all high-calibre publications, known for their quality of writing (if not, depending on your political leanings, the quality of their argument). It was therefore with great anticipation that I picked up Union Atlantic: I am usually a fan of novels like this, which examine the relationship between different classes of American society and what people will do to maintain their position or ways of life (hence my fondness for novels such as Ethan Canin’s America, America). Sadly, however, Union Atlantic did not live up to my expectations – which had only been fanned by the glowing endorsements printed on the dust-jacket (the marketing manager is due a bonus, I think…).

Ok, so that’s a rather negative opening to this review. I don’t like writing ‘negative’ reviews, but there’s no denying that I am not as taken by this novel as some of the luminaries who claim to have loved it. The novel still has plenty to offer and much within it is worthy of being read by anyone with an interest in the current state of American society. Haslett’s got an excellent grasp of the facts, economics and politics involved in his subject, which he can convey in a good, clear manner. When describing the real estate market pre-2007, for example, he strips out the jargon, leaving it clear and easy to read:

“Thus were the monthly payments of couples in California and Arizona and Florida transformed by the alchemy of finance into a haven for domestic liquidity and the Chinese surplus, a surplus earned by stocking the box stores at which those same couples shopped.”

The global economic crisis and the state of the American financial system are important to the story, but not central theme. That would be the characters themselves. That being said, Haslett manages to get a lot of social and political commentary into such a slim novel: the negative role of financial titans in politics, the characters of the CEOs and high-fliers, the decline of economic politics:

“What had govt become these days but the poorly advertised fire sale of the public interest?”

The portrait of these CEOs is somewhat stereotypical – unsurprising as we’ve seen, over the last year or so, lots of evidence that Gordon Gekko was not a total caricature. Jeffrey Holland, the CEO of the Union Atlantic Group (i.e., Doug’s boss), is described as “A bit glib, a bit of a showman. In it for the sport of the deal.” They are all enamoured of the trappings of wealth (mansion, car, money, getting what they want regardless of who gets caught in the slip-stream), and the hollowness and blatant greed is competently portrayed and will perhaps make even the staunchest capitalist think twice before building an absurd McMansion. (At least, they’ll pause until they realise theirs is bigger than someone else’s, which will restore that warm, fuzzy feeling…)

Haslett touches on all the right topics (race, society, money, sexuality, loss, exploitation, and so forth), which should have combined to create an involving and engaging story, but it all seemed too familiar. I’d read most of this already, I felt – be it in previous novels, or in the excess of journalism I consume. Doug’s exploitation of Nate’s confused sexuality and proximity to Charlotte (she tutors him) could have been made more of – like I said, basically nothing had happened by the time I finished almost the first half of the novel (the scene-setting and general build-up takes way too long for a short novel).

Charlotte’s slow decline into dementia (a result of her solitary existence) sometimes amuses, but otherwise I thought it didn’t really belong in the novel, and was a distraction from her otherwise patronising, self-satisfying, arrogant, and strident interactions and conversations with Nate. It’s not that I inherently disagreed with her, it’s just that her entire manner in the novel was… well, obnoxious.

Doug is a bit one-dimensional. He’s in love with his life and himself; he comes across as vain and narcissistic, all about the game – and yet also liked by his co-workers and employees. This was disappointing, as a few more layers would have been interesting, and at least made him less obviously the ‘bad guy’. When he first gets ‘involved’ with Nate, there are a few moments when he questions what he’s doing, but that’s about it.

Nate, on the other hand, is an interesting character, and I did develop a fondness for him, and to care about his predicament. His inner sadness is clear, and permeates almost his entire life; his father’s suicide and his helpless concern for his lonely mother, unable to solve either of their problems. It was difficult not to feel his sorrow when Haslett writes from his perspective. He also has a few good one-liners, which he manages to get in, between Charlotte’s tirades. His friends are realistic, in their pretentions and quirks, their dialogue sounds so like some of my students’, and raised a smile on occasion. His devotion and attraction to Doug develop a little too quickly, as does his comfort at just turning up at Doug’s – this doesn’t quite match his supposed shyness and awkwardness.

Why, then, did I not love this novel? Why did it fail to ignite my passion for politics and fiction? Well, I guess it’s because it was all a little too familiar. Half the way in, I still didn’t care that much about what happened to the characters, though the story did pick up a bit in the second half as the story comes together. The dusk jacket includes an endorsement that describes the novel as “An enthralling, lucid and superbly confident work of art… a masterful debut”, and yet I didn’t feel particularly enthralled by it, and I wouldn’t consider it a “work of art”. Instead, it’s just a very well written, if not entirely original and slightly flawed, novel. It lacks ‘mastery’ because it doesn’t tell us anything we don’t already know (about the real world), or couldn’t see coming (in the novel).

Haslett is a very good writer, don’t get me wrong about that; perhaps he just has a little way to go before he’s a great story-teller. The prose in the novel is excellent, and the flow of his words and dialogue never felt forced, clunky, or disjointed – you will find yourself burning through the pages pretty quickly. He also has a good journalist’s ability to explain complexity through clear and simple language – which would be welcome in a lot of journalism, right about now – and his crisp prose probably a result of his journalistic career. There’s no extraneous exposition, no word feels like padding. Haslett has a very good economy of phrase and words that amounts to an accomplished writing style.

I wanted to like this novel, I really did. Sadly, however, I’m afraid I just didn’t love the story, despite the clear quality of writing on display. I’ll concede that I might just not have been in the mood for this, but I still feel that I wouldn’t have loved it even if I’d been starved of politics and fiction for months. Maybe it needed to be longer? Not used to suggesting that, but I can’t help wondering what he could have done with more space – perhaps Doug could have been rounded out; Charlotte could have been better explained and maybe more restrained; and Nate’s character and life could have been explored in greater detail.

Cautious recommendation for anyone who wants something well-written and timely, but not overly taxing.

Posted by Civilian Reader at 1:37 PM