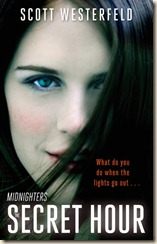 Re-release of an excellent YA series

As the new girl at Bixby High School, Jessica Day expected some unwelcome attention. What she didn’t expect was to feel an instant connection to a stranger in the corridor…

Who is this boy dressed in black? And why can she feel his eyes following her wherever she goes?

The answers will have to wait until the sun goes down, for here in Bixby, midnight is the time for secrets; secrets that Jessica is going to find out, whether she wants to or not.

Reading the back of this re-release of Scott Westerfeld’s The Secret Hour (the first in his Midnighters trilogy), you could easily form the impression that this book will have a lot in common with Stephenie Meyer’s Twilight. Given the success of the Twilight series, it’s not surprising that the publisher would choose to highlight their similarities – both tell the story of a teenage girl moving to a small town and finding herself enmeshed in supernatural activity. That, however, is where the similarities end. Readers of The Secret Hour will find a very different kind of novel.

In Bixby, Oklahoma, there is a twenty-fifth hour to every day, compressed into the instant of midnight. Soon after her arrival in Bixby, Jessica learns that she is one of the few people aware of this hour, able to experience the town when time appears to be frozen. She joins Rex, Melissa, Dess, and Jonathan, all awake to the secret hour because they were born at midnight, in a world that is at once exhilarating and dangerous. Westerfeld does an excellent job of evoking this in-between world, both the magic and the horror of it, through Jessica’s first encounters with it.

The novel unfolds through the perspectives of all five ‘Midnighters’, varying chapter to chapter. Westerfeld’s characters are individually well-drawn, and their relationships nuanced. His greatest strength, however, is his representation of their dynamics as a group. In many ways, they fulfil the requirements of a classic group of superheroes. Each character, when in the “blue time” of the midnight hour, has their own special power, which combined with the others enables them to defend themselves against the dangerous creatures that populate this hidden world. However, Westerfeld’s characters resist the easy unity, of both mindset and purpose, that this can imply. Each of Rex, Melissa, Dess, Jonathan, and Jessica experience the secret hour differently, and so relate differently to the group. The very term ‘Midnighters’ suggests a unity that is almost immediately undermined – coined by Rex to describe their group and people like them, it is a label that Jonathon refuses to acknowledge.

The narrative of The Secret Hour is fast-paced and engaging, with Westerfeld revealing the mythology of his world, both fascinating and complex, skilfully throughout the novel. We generally learn things as newcomer Jessica does, which, given the rapidity with which events move, is often piecemeal, and on the run. Even after Jessica is given a lengthy lesson on the nature and history of the Midnighters, we are left with the impression that she – and therefore we – cannot know the whole story. Westerfeld effectively builds revelations about the Midnighter mythology into the tension of his plot, which should leave readers eager to discover not only how his story turns out but also more information about his world.

The Secret Hour is an excellent piece of YA fantasy – an enjoyable read, with a quickly-moving plot set in a well-imagined world, it is a very good introduction to the Midnighters trilogy. The novel was originally published in 2004; this new edition boasts an attractive new cover design.

Posted by Civilian Reader at 2:05 PM