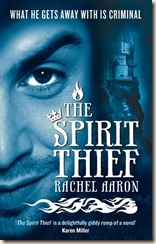 Introducing The Legend of Eli Monpress

Eli Monpress is talented. He’s charming. And he’s a thief.

But not just any thief. He’s the greatest thief of the age – and he’s also a wizard. And with the help of his partners – a swordsman with the most powerful magic sword in the world but no magical ability of his own, and a demonseed who can step through shadows and punch through walls – he’s going to put his plan into effect.

The first step is to increase the size of the bounty on his head, so he’ll need to steal some big things. But he’ll start small for now. He’ll just steal something that no one will miss – at least for a while.

The encomiums on the cover of this novel, from a notable selection of authors had me intrigued from the get-go. Ordinarily, I think blurbs of praise should always to be taken with a pinch of salt, but in the case of The Spirit Thief, I think they are spot on. I had hoped this novel would be something to entertain and engage my attention for a short while in between larger reading projects, and I was far from disappointed.

The events described in the synopsis happen in quick (wryly humorous) order, and a wider conspiracy opens up in the wake of Monpress’s unorthodox theft. It turns out that the kingdom in which he decided to operate is anti-magic, and with the disappearance of the king, a forgotten magically-gifted elder brother moves in to usurp the throne he believes rightfully his. Monpress and his gang of thieves – along with two unlikely and hesitant allies – must right what they have caused, which (thankfully) leads to more hijinks and intrigue.

Aaron’s novel is, in a word, fun. Far from being a world-building extravaganza, filled with exposition or slow events as we are given a detailed introduction to some vast, new, fantastical world, the author has taken a more direct route. It is a familiar-feeling fantasy setting, and Aaron has allowed the events of the story fill in the overall picture of the world, and the same with the characters, all of whom are interesting and well-rounded. Eli Monpress, the titular hero, is a rather cocky prankster, an anti-hero who likes to thumb his nose to all authorities, but most of all the Spirit Council. Miranda, the agent of the Spirit Council sent to hunt Monpress, finds him endlessly exasperating and difficult to pin down and capture. Monpress’s companions – Nico the mysterious demonseed, and Josef the highly gifted swordsman – add balance to Eli’s seemingly limitless (not to mention unique) magical abilities. Renaud, the usurping brother, along with Coriano (another swordsman hunting Josef), provide excellent foils for our heroes. The author does an excellent job of slowly revealing ever-more detail about Renaud’s ultimate agenda, too.

The novel has an intriguing new magic system – everything in the world has a spirit, from pebbles to trees, swords, and even sand (not to mention sandstorms, which are a whole other proposition). Spiritualists can communicate with these spirits and offer a sharing of power for help and mutual service. Eli’s powers, however, seem to be different to your average spiritualist’s, but only slowly are they explained to us, with hints of something far larger going on behind the scenes – beyond the scope of Eli’s plots and plans. Mostly, he seems to be able to convince spirits to do what he wants just by charming them. (For example, Eli spends the first four pages talking to a suspicious door, convincing it to open up for him. This is only one example of the many quirky events of the novel, all of which endeared the series to me even more.)

I am very eager to see how the series develops, as reading The Spirit Thief was a real pleasure (The Spirit Rebellion and The Spirit Eater are published in November and December, respectively). There’s more going on behind-the-scenes and on a larger scale than is fully revealed in this first novel, and I’m hoping each novel adds more detail and depth to the characters and their motivations, and also the world Aaron has created.

As it’s only 300 pages long, it’s a quicker read than almost all fantasy debuts released these days, but its brevity does not detract from the quality of the story or the author’s inventiveness. Aaron’s prose style is fluid and stripped-down, allowing the action to drive the story and develop the characters. It’s a very natural style, and it never feels like we’ve stumbled into a passage of clunky exposition – the author informs us of what we need to know when we need to know it. No info-dumps, no surprisingly-well-informed dialogues between minor characters.

Ultimately, I think Aaron has written a fantasy series with entertainment at its heart, rather than some grand, cerebral fantasy. And it works on every level.

With wry humour, interesting characters, realistic dialogue and a fast-moving and fun plot, The Spirit Thief was exactly what I needed, and I recommend it to all fans of fantasy who’d like something a little lighter.

[As with many Orbit titles, The Spirit Thief also comes with an author interview and a couple of preview chapters of the next book in the series.]